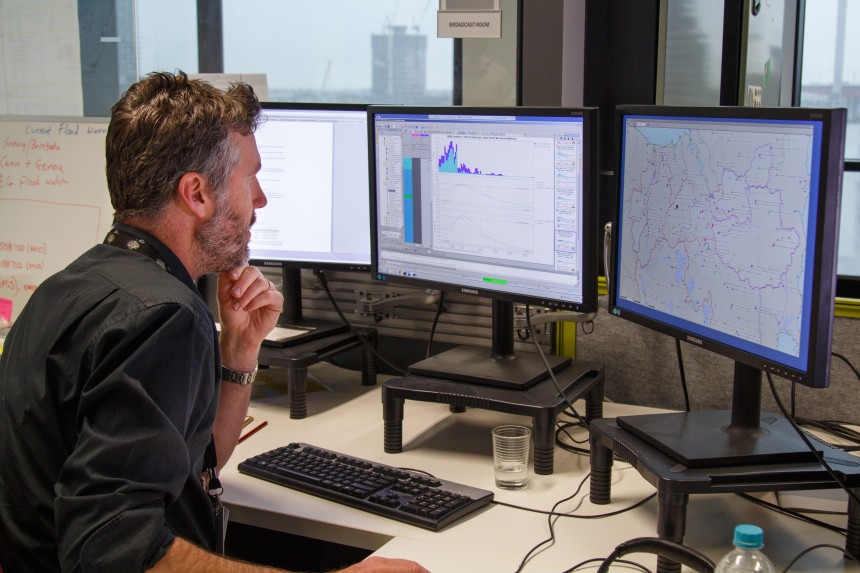 As the 1st Edition of the book “Flood Forecasting, A Global Perspective” has just been released, Thomas Adams (UCAR) and Tom Pagano (BoM) [see their bio below], editors, recall how the idea of the book was born and what they have learned when editing contributions describing national and regional flood forecasting systems from 11 different countries, as well as continental scale systems. This reference book points out challenges and ways forward to improve flood forecasting around the world. 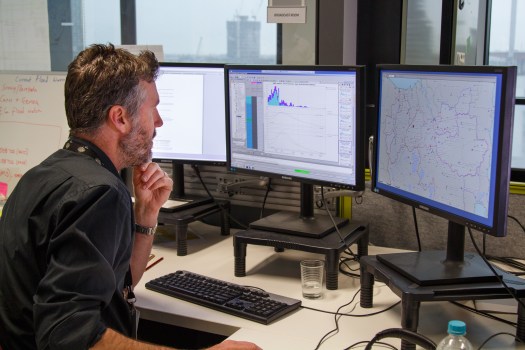 Australian hydrologist David Wilson at the flood desk of the Victorian Regional Forecasting Centre. He is using the Bureau of Meteorology’s next generation Hydrological Forecasting System (HyFS) for operations during a large East Coast Low system in early June 2016 (© BoM)

Maria-Helena Ramos (MHR): What is the book about?

Thomas Adams: The book presents overviews of national and large regional operational flood forecasting systems as they exist right now around the globe and the operational challenges they face. Our intent is that the authors would provide some historical context that brought the systems to the point they are now. Tom Pagano and I felt it was critical that these systems should be described from the perspective of those that developed and use the system in their countries. We also included chapters on what appears to be the direction flood forecasting is advancing with continental and global forecast systems and the challenges they face moving forward.

MHR: Where does it cover?

Tom Pagano: Every continent is represented except Antarctica. We included developed and developing countries, from China to Colombia to the Congo. It also includes trans-national systems.

MHR: What was the original inspiration for the book? What were you trying to achieve?

Adams: The book began from something of a chance encounter with representatives from Elsevier wanting to offer to the hydrologic community a book covering topics in hydrology following the American Meteorological Society Annual meeting in 2014. I was on the agenda to moderate a technical session and was asked my thoughts for a book. I had thought for some time that something along the lines of the book was long overdue and suggested a book with this format, which Elsevier enthusiastically supported.

MHR: What did you learn in writing the book, what were your most surprising findings?

Adams: (Laughing) How relieved I would be with the completion of the book! With having seen many different approaches to the design and implementation of flood forecast systems, there are not many surprises. At the same time, it is gratifying that there are so many similarities between systems. This, again, is not very surprising since many of the problems are universal. The most troubling issue for me, which the book hopes to address, is the relative lack of understanding of National or regional scale systems and seemingly poor communication between those developing, implementing and operating these forecast systems. 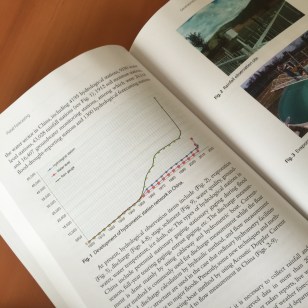 Pagano: Like Tom, it’s surprising how universal some problems are, such as data. Water is both a necessity and a hazard; for forecasters, the same is true for data. Data are our lifeblood and yet they can also be our downfall, such as when they are poor quality. I was also impressed with some of the real changes that are underway. For example, in just the past few years China has nearly tripled its already large raingauge and river station networks.

MHR: How are operational systems doing with respect to ensembles?

Adams: A few countries have ensemble products, including public products, but generally it has been an uneasy transition from deterministic to probabilistic products. I would liken it to the transition from point-based to graphical products in weather forecasting; initially there were difficulties and frustrations and questions about if this is what the user wanted and how we can keep experts in the loop… But now it is almost taken as given. There still is a major challenge with end-users accepting and understanding probabilistic forecasts — much needs to be done on this front.

MHR: Is there anything countries could be doing better?

Pagano: Given the common nature of our problems, there are so many opportunities for collaborations and exchanges. This might be easier in other fields – when one country produces an El Nino forecast, many countries can benefit and are interested. However, hydrology is very local and why would other countries care about the forecasts for a catchment in Australia? This leads to systems being developed in isolation, reinventing solutions. Here is where initiatives like HEPEX can come in, to give a sense of the big picture and to make connections throughout the international community forecasters, researchers and developers. Deltares has also built a community around its flood forecasting platform FEWS.

MHR: The recent Hepex workshop held in Quebec made us wonder that although advanced methods and techniques exist (for ensemble prediction, data assimilation, post-processing, etc.), these are not always already implemented in operational systems. What advice would you give, for researchers and operational forecasters, to foster the science-operations dialogue in flood forecasting?

Adams: This is an excellent question. It goes without saying that there should be something of cooperative effort in the development and implementation of ensemble forecast systems in operational environments. What is missing is demonstration of clear and unambiguous evidence of the superiority of ensemble forecasts over single-valued, deterministic forecasts. This requires a paradigm shift in our thinking and will necessitate significant education and training of forecasters, but also the general public and decision makers.

Pagano: If ensembles are the answer, what was the question again? Do researchers and forecasters know who are going to use these new products, and for what? Operational agencies want to reap the benefit of their investments in their existing systems and are eager to innovate if there is a value proposition. This generally means fewer resources needed to make better products more reliably.

My other advice is to recognize that crises are important catalysts for change in institutions. We read several examples where major floods (or serious droughts) motivated stakeholders to see what more could be done to prevent the next disaster. This led to historic changes in arrangements, practices, technologies and so on. Clearly it helps to have good relationships established between scientists and practitioners before such events happen.

MHR: What is next? A Global perspective on operational drought forecasting systems? Any other projects in your minds?

Adams: I would love to plan for a 2nd edition, which would give current contributors the opportunity to update their chapters, but, more importantly, we would like to include additional contributors that were either missed or were unable to fit into their schedules the time to write a chapter. We also would like to strengthen sections on the future of flood forecasting and the problems facing the enterprise, specifically as it relates to human impacts and warnings. I have been approached by Elsevier to consider another project, which I suggested a similar volume dealing specifically with flash flood monitoring, warnings and prediction. I would encourage anyone who has interest to please contact me.

MHR: Any final thoughts to share with the Hepex community?

Pagano: I think there’s something for everybody in this volume, whether you are a researcher, forecaster, student or even just interested in history and institutions.

MHR: Thank you both for taking your time to answer these questions!