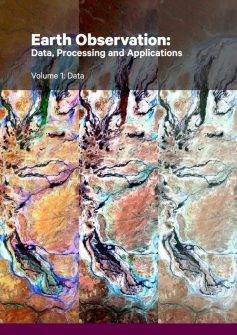 Barbara Harrison from Canberra-based Digital Concepts launched the first of a series of comprehensive new manuals on Earth Observation in Australia during the recent CRCSI Conference in Sydney.

The long-awaited manual, Earth Observation: Data, Processing and Applications, is the first of a series that will cover all aspects of Earth observation: data, the applications that use the data and the underlying technologies.

This is not the first book on Earth Observation that Harrison has written. With Alex Held and Kimberley Clayfield, she previously published a book in 2012 called Continuity of Earth Observation Data for Australia: Research and Development Dependencies to 2020.

The new 278 page manual, Volume 1: Data, is one of two planned on remote sensing data. It describes the scientific foundations of Earth observation and describes the basics of data acquisition. The manual is available in paper or for download from CRCSI. Another two volumes are currently being developed: Volume 2 will look at processing and Volume 3 will progress to applications.

Speaking at the launch, University of New South Wales’ Professor Tony Milne said that Australia has an ambiguous relationship with Earth Observation. On the one hand, the nation has a long track record of innovation in applications and data handling.

He pointed to MicroBRIAN, one of the first image data manipulation packages, which was written by a team at CSIRO, including Harrison, to handle satellite imaging of the Great Barrier Reef.

He also spoke about the world lead achieved by Australian scientists in the manipulation of hyperspectral imagery during the 1990s, and more recently, the the Australian Geoscience Data Cube, an initiative developed by Geoscience Australia, CSIRO and NCI, which fuses a time series of 30 years of Landsat images of Australia.

But on the other hand, Australia is totally dependent on the goodwill of other countries for access to space sensors. The country has no satellites, no space agency and absolutely no interest in spending money to develop its own space-based capability.

A second area of concern is that training in Earth observation technologies appears to be going backward. The number of university courses is shrinking and it is becoming progressively more difficult to replace highly experienced staff as they retire.

During her presentation to the conference, Harrison said one of her aims was to provide a resource that would remedy this lack.