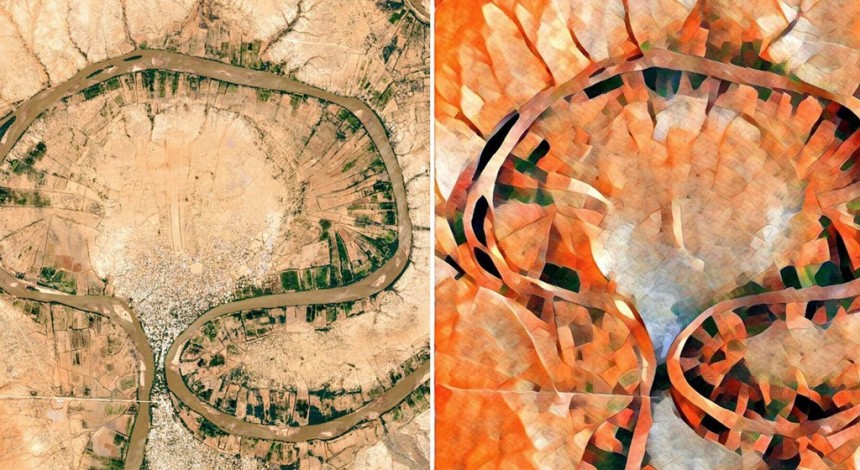 With help from satellites, artificial intelligence, and a painter born in the 1800s, a cartographer has created remarkable images of human-altered landscapes.

The image above is what happens when you take a satellite photo of Earth and use an artificial intelligence program to give it a makeover in the style of an early 20th-century painter. Pretty trippy, right?

It’s just one of many remarkable pieces of art made by Bill Morris, a cartographer at Faraday, a data analytics company in Burlington, Vermont. He shares his art on his web-based Geosprocket Planet Gallery.

Morris says he was inspired by Meredith Scheff-King, an artist who recently made watercolour paintings of satellite imagery. He wanted to try something similar but didn’t have that kind of artistic talent. That’s where the AI came in.

Morris started playing around with a smartphone app called Prisma, which lets you alter photos to emulate the style of famous artists. Prisma uses something called a convolutional neural network, a type of artificial intelligence that recognises patterns by mimicking the brain’s visual system.

The app itself didn’t do everything Morris wanted, but the underlying source code is open access. He had the tech skills to start playing around with it, so he started making adjustments to get the effect he was looking for.

Trees intermix with tall buildings in these images from Sydney, Australia. PHOTOGRAPH BY DIGITAL GLOBE; ILLUSTRATION BY BILL MORRIS

The image at the top of this post was created from a photo taken by the San Francisco–based satellite imagery company Planet Labs. Morris altered it in the style of Francis Picabia, a French avant-garde painter and contemporary of Pablo Picasso. Like Picasso, Picabia was associated with cubism, an early 20th-century art movement that was all about deconstructing objects into their constituent lines and curves and then putting them back together in a slightly different way.

It’s an apt metaphor for how humans have altered the natural landscape, Morris says. “We break apart the ground at all scales, and we put it back together, repurposed; human straightaways against nature’s arcs and bights,” he wrote in a blog post describing his work.

Tweaking a few lines of code doesn’t exactly feel like making art, Morris told me, but he followed his own aesthetic sense all the same. He settled on Picabia and another lesser known cubist named Lyonel Feininger because they used more colour than Picasso. “I’m kind of a nut for vibrant colours,” he says.

Circles created by pivot irrigation systems become art in an altered satellite photo of an area near Aruanã, Brazil. ILLUSTRATION BY BILL MORRIS

Morris has played around with other artistic influences, but so far he thinks cubism makes the most compelling images. He likes the way it highlights human impact on the landscape. “I don’t want to say there’s some huge potential for an environmental awakening,” Morris says. “But it always helps to change your perspective a little bit.”

Header image: The straight lines of human development stand out against the curve of a river in the cubist version (right) of a satellite image of Luuq, Somalia. PHOTOGRAPH BY PLANET LABS; ILLUSTRATION BY BILL MORRIS