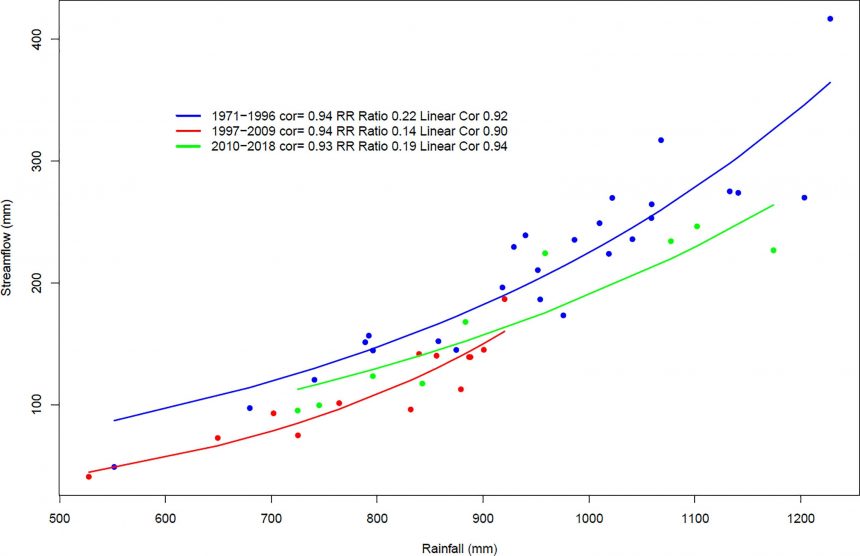 The well documented relationship between rainfall and runoff in Victoria catchments has changed before, during and after the Millennium Drought (1997-2009) (Figure 1). Several theories explain it, such as higher evaporation, more farm dams, surface and groundwater interaction. However, a universal and physical process-based explanation for the changes is still not fully acceptable.

The current study demonstrates the benefits of using a simple statistical analysis to investigate the attribution of climate characteristics to non-stationary rainfall-streamflow relationships, given the knowledge of changes in weather systems (fronts, thunderstorms and cyclones). Rainfall and streamflow data from 65 Hydrologic Reference Station (HRS), a subset of the 137 HRS in Victoria, with complete records from 1971 to 2018 without any missing values, are used to quantify the rainfall-streamflow relationship during (1997–2009), and prior to (1971–1996) and after (2010–2018) the Millennium Drought (Figure 2).

The results show that annual streamflow is strongly correlated to annual rainfall, however the relationship can be very different in the different hydroclimate periods. The regression model against annual rainfall (AP), developed using the wet 1971–1996 period, significantly overestimated the streamflow in the 1997–2009 Millennium Drought period and 2010–2018 post-drought period, where the rainfall has recovered but the streamflow is still lower than the 1971–2018 mean .

The number of days with rainfall above 1 mm (RD) and the mean wet-spell length (MeWS) are found to be the two most “stable” variables that can best predict annual streamflow in the different hydroclimate periods (Figure 3). This is followed by the maximum and 99th percentile of 90-day accumulated total rainfall (D90Max and D90P99). The contributions of the MeWS to annual streamflow prediction should be emphasised. The combination of MeWS with many other climate variables significantly improved the streamflow prediction, particularly during the Millennium Drought.

The findings of this study by CSIRO Land and Water can help identify key rainfall and climate characteristics to be considered in assessing the impact of climate change and climate variability on streamflow and water availability. They can potentially help develop hydrological models and hydroclimate relationships that can be more robustly extrapolated to estimate streamflow under a changing climate.

This study is funded by the Victorian Water and Climate Initiative.