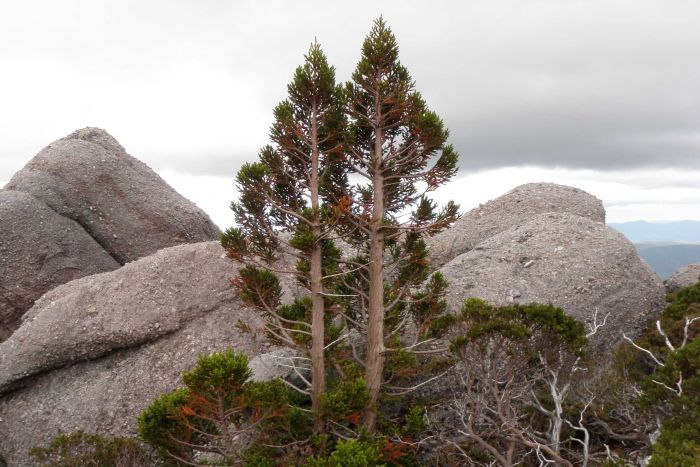 King Billy pines don’t really look all that impressive — they’re not the biggest, prettiest or widest of trees — but they can tell us a lot about our history.

The trees, which are actually conifers but not pines, have been used in an eight-year study by an international research team to understand the environmental history of Australia.

Kathy Allen from the University of Melbourne led the research team and said the process sampled living and dead trees.

“We got several hundred trees or cores from these trees,” she told Leon Compton on ABC Radio Hobart.

“The oldest one there is probably around 2,000 years … it’s quite amazing to be in the presence of something so old.

“Some of the dead trees have been on the ground for 1,000 years and they’re still solid logs.”

Dr Allen said the small cores from the trunks of the trees allowed them to see the tree rings without cutting them down.

The samples were then combined into what is called a tree ring chronology which dates back 1,700 years.

PHOTO: Many of the trees growing at Cradle Mountain have been there for more than 1,000 years. (ABC open: Vicki Smith)

The tree ring chronology shows the growth rate of the ancient trees, which can be used to interpret the climate and other environmental influences in Tasmania.

“A lot of the work in Tasmania has been focused on trying to look at the climate history, so what were temperatures like a long time ago,” Dr Allen said.

“What we do see is there’s been some rapid growth since the late 1800s onwards; many people would equate that directly to temperature, but I think it might be a bit more complicated in this case.

“You sort of see that the 1700s were a fairly hard time for the trees, there were a lot of narrow rings around that time.

“Then there was a fairly warmish period, we think around 1,000 AD, but there’s quite a few uncertainties that need to be worked out.”

History of bushfires told in the trees

Dr Allen said there was ongoing work to be done interpreting the tree ring chronology — not just looking at the climate, but also searching for evidence of things such as bushfires.

“We looked at approximate establishment dates for this site [Weindorfer Forest at Cradle Mountain] and for a place called Mount Read which also has some very old trees,” she said.

“We could tell for Cradle Mountain there seems to be what we call a reasonably even establishment over time.

“That suggested to us that … within the small sites that we looked at … there hadn’t been these major fires there in those conifer forests for about 1,700 years.”