40 degrees in April: Why this autumn has felt more like summer 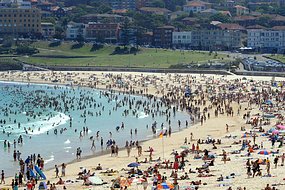 The southern states of Australia have been experiencing unseasonably hot weather this autumn.

Instead of enjoying a cool change after a harsh summer, in the first two months of autumn we have seen record-breaking temperatures, bushfires, and blistering days equivalent to those endured in the height of summer.

“I would bet my house on it, that there’s a climate change signal in this most recent heatwave,” University of New South Wales climate scientist Sarah Perkins-Kirkpatrick said.

Dr Perkins-Kirkpatrick has not hedged her bets on what she believes is influencing March and April’s record-breaking heatwave, but said the occurrence of this type of weather event was increasing.

“There’s no other way of slicing and dicing or sugar-coating it,” she said.

“We’ve seen quite a significant increase in heatwave frequency, particularly in southern Australia.”

Sydney, Adelaide and many other locations had their hottest or equal-hottest April days on record, as did the states of South Australia, Victoria and New South Wales.

Bushfires have raged across the outskirts of Sydney, country Victoria, and in Tathra on the far south coast of NSW, weeks after the end of the usual fire season.

In a special climate statement, senior climatologist Blair Trewin from the Bureau of Meteorology said the conditions had been more like mid-summer than mid-autumn.

“A lot of those averages for the first 10 days of April were reasonably close to, or even slightly above January averages,” Dr Trewin said.

The autumn heatwave was exceptional not only in extremes of temperature, but also in the extent of the country affected and the persistence of the heat.

Almost the entire continent had maximum temperatures above average on most of the first 10 days of April.

Heatwave started in the desert

The Pilbara in north-west Western Australia endured more than two weeks over 40 degrees in mid-March, ending with several days over 45 degrees — temperatures never before seen in Australia at that time of year.

Then at the start of April, a high pressure ridge and a cold front pushed that warm air east, bringing the first wave of record temperatures to New South Wales.

In an ordinary heatwave, the passing front would bring cooler temperatures and end the event.

But instead, temperatures started building up in WA again in early April before a new front sent a second blast of hot, West Australian air across southern Australia.

IMAGE: The autumn heatwave started in the Pilbara.(Supplied: Annabelle Coppin)

On April 11, the heat shifted south, breaking records in almost a third of Victorian locations, smashing the Victorian state temperature record by one and a half degrees.

“When you’re breaking a record over a whole state by that sort of margin, that’s a significant event,” Dr Trewin said.

Dr Trewin, who has an uncanny memory for weather, said this heatwave resembled one in April 1986, which he remembered because it was the day of his school cross country race.

“I remember one of the race winners finished in a state not too dissimilar to the Scottish guy in the [Commonwealth Games] marathon this weekend.”

Dr Trewin said this April heatwave was hotter and farther reaching than the 1986 event.

“And April’s heatwave fits exactly with that trend.”

Dr Trewin agreed, pointing out that spring heatwaves were increasing faster than events in autumn.

“In the past five years, we’ve seen two particularly significant heatwaves in September in 2013 and 2017,” Dr Trewin said.

“We’ve seen a major one in October 2015. We haven’t seen quite the same clustering in autumn.”

“The influence of climate change is that it shifts beyond,” Dr Trewin said.

“So the types of events you might have seen once in 50 or 100 years in the climate of the mid-20th century, you might see once in five years or once in 10 years in what we have now.”