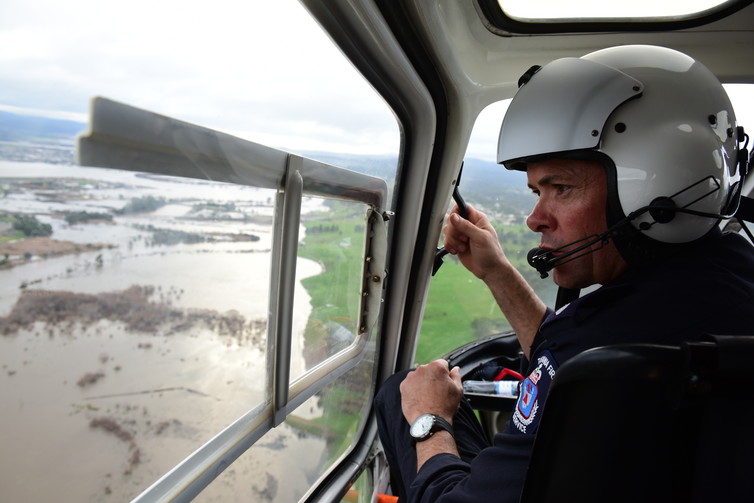 Tasmania has had a damaging year, with the island state hit by a series of bushfires and floods.

Now a comprehensive new assessment of Tasmania’s exposure to natural disasters shows that bushfire remains the number one hazard to people and property, while also highlighting a range of new threats. These include coastal flooding, pandemic influenza and – despite being Australia’s most southerly state – an increasing likelihood of heatwaves.

The 2016 Tasmanian State Natural Disaster Risk Assessment (TSNDRA) aims to provide emergency services with key information to help prepare for and reduce the impact of disasters.

It is the first state-level assessment in Australia that adheres to the recently updated National Emergency Risk Assessment Guidelines. All states and territories are required to produce their own risk assessments by June 2017. Given Tasmania’s unprecedented recent run of natural disasters, it is fitting that it should be the first state to publish a comprehensive roundup of the risks.

The assessment of natural disaster risk took place over 12 months from March 2015. It involved a series of workshops and online surveys of experts in each hazard area.

For the first time, the process was led not by state government agencies, but by a close collaboration between researchers at the University of Tasmania, RMIT University and the Antarctic Climate & Ecosystems Cooperative Research Centre, together with members of the State Emergency Service and related agencies, and other stakeholders including the Bureau of Meteorology, Australian Red Cross and Engineers Australia. The process aimed to allow a range of different voices to inform the identification of priority risks for Tasmania.

Each workshop considered the underlying risk of different natural hazards, as well as considering the consequences of worst-case scenarios for each hazard, such as the 1967 bushfires or the 1929 Launceston floods.

The use of a “confidence” rating – a new addition to the assessment process – allowed for uncertainty in data, or disagreement between experts. This enabled us both to identify gaps in overall knowledge about different natural hazards and to weight the advice of different stakeholders appropriately.

Bushfire is the highest risk, but Tasmania’s hazard profile is changing

Perhaps not surprisingly, our results showed that the risks of bushfires, floods and severe storms continue to figure prominently in Tasmania. Bushfire remains the greatest aggregated risk, as illustrated below.

Such “catastrophic” scenarios could result in one in 10,000 deaths, or an economic loss of greater than 4% of gross state product. Furthermore, the likelihood of a catastrophic bushfire event is increasing as our climate changes.

Three new “emerging” risks were added to this 2016 assessment. These additions reflect either improvements in information availability or shifting likelihoods of an event occurring. The emerging risks are heatwaves (now acknowledged as the most dangerous hazard in Australia in terms of deaths caused), pandemic influenza (which can potentially affect a large area for a prolonged time), and coastal inundation (which will grow more likely as sea levels rise).

The report updates and builds on an earlier assessment published in 2012. This allows the state’s risk profile to be tracked over time as conditions continue to change. The improvement in hazard knowledge, changes in socio-economic and environmental conditions, and the implementation of new treatments or controls by state authorities as new disasters occur mean the risks we face will need to be continually re-assessed into the future.

Based on the new risk registers for each hazard, a separate expert workshop developed a portfolio of potential treatment options for the most at-risk sectors. These include, for example, recommending the continuation of the successful fuel-reduction program and the updating of flood-evacuation plans for at-risk communities, as well as putting forward new or enhanced treatment options such the creation of a state-wide flood hazard map and the expansion of existing disaster preparedness programs.

The treatment options also highlight key research gaps around such topics as coincident extreme events or the impact of heatwaves on Tasmania’s population. This portfolio is being refined to help prioritise new risk-reduction actions across Tasmania.

While the report is mainly aimed to inform the State Emergency Management Committee, its findings are also relevant to a range of authorities, agencies and individuals with responsibilities for emergency risk management. Hazard fact sheets and a summary document to inform Tasmanian communities are available via the report links below.