Analogues are the new deterministic forecasts 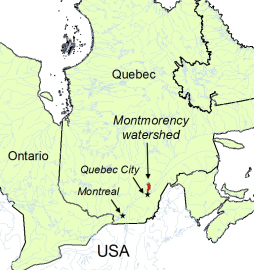 According to Krzysztofowicz (2001), “Probabilistic forecasts are scientifically more honest [than deterministic forecasts], enable risk-based warnings of floods, enable rational decision making, and offer additional economic benefits.” More than 10 years later, I think most people (and especially members of the HEPEX community!) agree with this statement.

On the choice of the most appropriate benchmark

Recently, Pappenberger et al. (2015) performed an exhaustive comparison between different types of benchmarks. They state that the choice of the most appropriate benchmark should depend on “the model structure used in the forecasting system, the season, catchment characteristics, river regime and flow conditions.” I would add that if you are using an operational forecasting system as a starting point for your research, one of your benchmarks should consist in this particular operational system. And, if I had the guts to do that, maybe I could cite myself as a bad example…

Hum…Well, okay, please just don’t tell anyone. In this paper, I show that ensemble forecasts outperform deterministic forecasts for the Gatineau River catchment managed by Hydro-Québec. But the thing is: Hydro-Québec has been using a sophisticated analogue forecasting method to produce their operational streamflow forecasts since the 70’s! Not deterministic forecasts! I was comparing my forecasts to the wrong baseline but I did not realize it at that time.

In my defence, I can only mention that none of my co-authors, including those working at Hydro-Québec suggested otherwise. Maybe everybody just had the same reflex? “Compare your ensemble forecasts to deterministic forecasts”.

Fortunately, one can learn from the past and I decided to always use the operational forecasting system (if there is any) as a benchmark for my ongoing and future projects, even if it means that sometimes, it might be disappointing (some analogue methods are really hard to beat!).

A small example for the Montmorency watershed

Figure 1: Localization of the Montmorency watershed

I want to show you a small, preliminary example, from an ongoing project on the Montmorency River (the tiny red watershed on Figure 1, which covers 1107 km2).

In this case, there is no disappointment: the good guys (ensemble forecasts!) still win (just be aware that these are not final results: the data assimilation scheme, for one thing, has not yet been implemented).

Currently, 1- to 5-day ahead streamflow forecasts are made available to the public and decision makers by the Centre d’Expertise Hydrique du Québec. Since 2013, these forecasts take the form of a mean forecast accompanied with a 50% confidence interval. The mean forecast (or 50% scenario) is in fact the deterministic forecast based on Environment Canada’s GEM atmospheric model. Precipitation and temperature forecasts are passed on to the distributed physics-based hydrological model HYDROTEL. The time step is 3h00 with a forecasting horizon of five days (120h00). The confidence interval is established based on the record of past forecasts and observations and it also depends on the season and on the forecasting horizon (see this post for more details). The analogues are obtained from a database that includes the errors between deterministic forecasts and observations from 10 watersheds, among which Montmorency. So it is not basin-specific as recommended by Pappenberger et al. (2015).

As an alternative, we propose using Environment Canada’s ensemble forecasts (also precipitation and temperature) instead of the deterministic forecasts. Each ensemble member is passed on to HYDROTEL, thereby explicitly considering the meteorological uncertainty based on current synoptic conditions and avoiding the use of analogues. The meteorological ensemble forecasts are also produced by the GEM model but with a different spatial resolution, different variants in the physics of the model and initial conditions.

Figure 2 shows hydrographs for both analogues and ensemble forecasts, for two different forecasting horizons (24h and 72h ahead). Analogues forecasts consist in the deterministic forecast dressed with a distribution with parameters that depend on past forecasts errors for the corresponding month. The time step is 3h00. The figure shows a short period of time during fall 2011, just to illustrate the case. The blue dots represent the ensemble forecasts and the red line is the observation.

One can see that analogues are not that bad, especially for the 24h00 horizon. The mean CRPS (Figure 3, below) also confirms that, for the short horizon of 24h00, analogues and ensemble forecasts are quite similar. I also included the mean absolute error (MAE) on Figure 3, so you can see that analogues always outperform deterministic forecasts, as the ensemble forecasts do. Analogues therefore constitute a more challenging baseline than deterministic forecasts.

Figure 3: The mean CRPS and MAE as a function of the forecasting horizon

On the use of more severe benchmarks such as analogues

In my opinion, using deterministic forecasts as the only baseline when assessing the performance of an ensemble forecasting system is akin to using the Nash-Sutcliffe criterion to assess the performance of a deterministic simulation or forecast. This criterion is based on a particular naïve forecast (the average streamflow) that is easily beaten compared to other types of naïve forecasts (ex. Schaefli et al 2007). For instance, the previous streamflow observation, used as a naïve forecast for a persistence-based criterion, is a much more challenging baseline.

Similarly, because they provide an estimate of the probability distribution, analogues are more difficult to beat than deterministic forecasts. In addition, there exists a wide variety of analogue methods, from very simple (like the ones in this blog) to very sophisticated (see, for example,Marty et al., 2012).

And you? What do you think? Is it really important for HEPEX to promote the use of meteorological ensemble forecasts in hydrology, or just any valid method of generating streamflow ensembles will do?