May 20, 2016 Anthony Kiem, Carly Tozer and Tessa Vance (University of Newcastle and University of Tasmania) Leave a comment 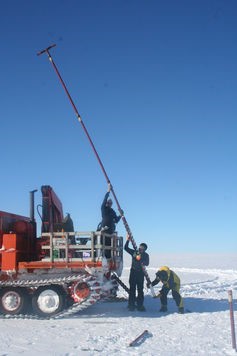 Australia is systematically underestimating its drought and flood risk because weather records do not capture the full extent of rainfall variability, according to our new research.

Our study, published today in the journal Hydrology and Earth System Sciences, uses Antarctic ice core data to reconstruct rainfall for the past 1,000 years for catchments in eastern Australia.

The results show that instrumental rainfall records – available for the past 100 years at best, depending on location – do not represent the full range of abnormally wet and dry periods that have occurred over the centuries.

In other words, significantly longer and more frequent wet and dry periods were experienced in the pre-instrumental period (that is, before the 20th century) compared with the period over which records have been kept.

There is no direct indicator of rainfall patterns for Australia before weather observations began. But, strange as it may sound, there is a link between eastern Australian rainfall and the summer deposition of sea salt in Antarctic ice. This allowed us to deduce rainfall levels by studying ice cores drilled from Law Dome, a small coastal ice cap in East Antarctica.

How can sea salt deposits in an Antarctic ice core possibly be related to rainfall thousands of kilometres away in Australia? It is because the processes associated with rainfall variability in eastern Australia – such as the El Niño/Southern Oscillation (ENSO), as well as other ocean cycles like the Interdecadal Pacific Oscillation (IPO) and the Southern Annular Mode (SAM) – are also responsible for variations in the wind and circulation patterns that cause sea salt to be deposited in East Antarctica (as outlined in our previousresearch).

By studying an ice record spanning 1,013 years, our results reveal a clear story of wetter wet periods and drier dry periods than is evident in Australia’s much shorter instrumental weather record.

For example, in the Williams River catchment, which provides water for the Newcastle region of New South Wales, our results showed that the longest dry periods lasted up to 12 years. In contrast, the longest dry spell since 1900 lasted just eight years.

Among wet periods, the difference was even more pronounced. The longest unusually wet spell in our ice record lasted 39 years – almost five times longer than the post-1900 maximum of eight years.

Although this does not tell us when the next major wet or dry period will happen, it does help us predict how often we can expect such events to occur, and how long they might last. This is critical information for water resource managers and planners, especially when our millennium-long record tells a very different story to the post-1900 instrumental record on which all water infrastructure, planning and policy is based.

Our results challenge the underlying assumptions that govern water resource management and infrastructure planning. These assumptions include:

The fact that these assumptions are probably wrong is a concern. These principles are used to make crucial decisions, not just about predicting the likelihood and severity of droughts and floods themselves, but also about the design of infrastructure such as roads, reservoirs and buildings. Our study suggests that these decisions are being taken on the basis of incomplete information.

What’s more, Australia’s increasing population and development will mean that water demands and exposure to droughts and floods are likely to have been different in the past to what they are now (and will be in the future).

Therefore, given that the factors used to quantify risk are most likely wrong, it implies that current hydroclimatic risk assessments are not representative of the true level of risk.

This raises serious questions about water security and the robustness of existing water resource management, infrastructure design and catchment planning across eastern Australia and in other places where hydroclimatic risk is assessed on records that do not capture the full range of possible variation.

Water is a precious resource, meaning that we need the best knowledge about what our rainfall patterns are capable of delivering. Our findings can be used to better characterise and manage existing and future flood and drought risk. Forewarned is forearmed.

Original article posted on The Conversation, 11th May 2016 (Link)