Australia’s climate in 2015: cool to start with a hot finish 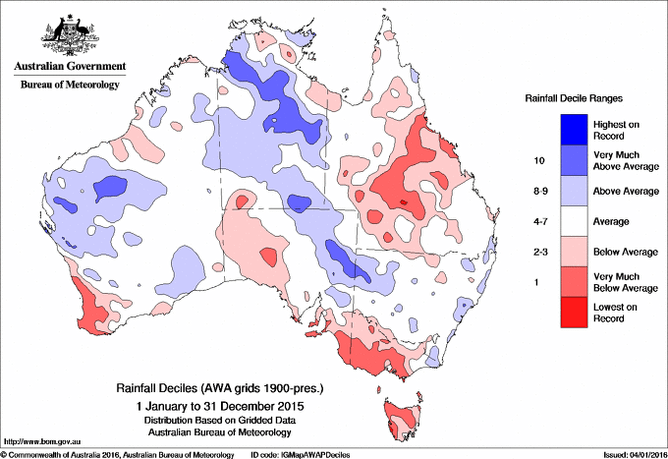 Today the Australian Bureau of Meteorology has released its yearly climate update. A strong El Niño event was the headline story underlying global climate in 2015, but its impact in Australia was mixed.

In some parts of the country it was a very dry year, but some other parts which are normally hit hard by El Niño – especially large parts of New South Wales – got off rather lightly. Record high temperatures in the Indian Ocean were part of the mix, providing a source of moisture at times over autumn and winter which offset the drying influence of El Niño.

After a false start in late 2014, full-blown El Niño conditions developed in the tropical Pacific Ocean by May 2015. The event intensified rapidly and went on to become one of the strongest El Niño events of the last 50 years, alongside 1982-83 and 1997-98.

In many parts of the world, El Niño’s impact on climate followed the usual script. In particular, there was serious drought in the second half of the year in Indonesia, Papua New Guinea and many of the western South Pacific islands, along with northern South America, Central America and the Caribbean. In Australia, the situation was more complicated.

Very dry in parts of Australia

Nationally, rainfall in 2015 was below normal, although nowhere near record-breaking levels. The national annual total was 5% below the 1961-1990 average.

A substantial proportion of 2015’s rain fell in January, especially in northern and central Australia. Alice Springs had three-quarters of its annual average rainfall in the space of a week (and then had only 10 millimetres in the next nine months). If January was taken out of the picture the year was much drier. The February-November period was the ninth-driest on record nationally, and in the northern half of Australia it was the driest since 1951. Heavy rain returned in December in the northern tropics, particularly the Northern Territory, which had its wettest December on record.

The standout dry regions of 2015 were the southwest of Western Australia and a region of the southeast encompassing central and western Victoria, the southeast of South Australia, and parts of Tasmania.

In the southwest of Western Australia average rainfall for the May-November growing season was the second lowest on record after 2010. Tasmania ranked seventh-driest for this period, and Victoria eleventh.

Spring was especially dry in Tasmania, where it was easily the driest on record, and both Tasmania and Victoria had their driest years since 2006.

In both southwest Western Australia and Victoria, the dry conditions in 2015 were an intensification on long-term rainfall deficits lasting several years, with Victorian rainfall since mid-2012 returning to levels typical of the 1997 to 2009 Millennium Drought.

2015 was also a relatively dry year for much of inland Queensland and adjacent northern New South Wales.

Some of the hardest-hit drought areas did a bit better than they had in 2013 or 2014 and northwest Queensland had useful rain at the end of 2015. But rainfall was still generally below normal and not enough to make any serious inroads into the multi-year drought afflicting the region.

It was also a notably dry year in parts of coastal north Queensland, with Townsville among the centres having its driest year on record. Some coastal regions further south had heavy rain in February from Cyclone Marcia, which made landfall north of Rockhampton, the southernmost known category 5 cyclone landfall on the Queensland coast.

In contrast to the dryness further north and south, New South Wales had near-normal rainfall in 2015. The inland received reasonably regular rain through the year, while the coast had several major downpours associated with east coast lows. Destructive flooding affected the Hunter region in April and the Illawarra in August.

The rainfall extended to southeast Queensland. Brisbane had its second-wettest year of the 21st century, with particularly heavy rain in early May and numerous severe thunderstorms during the spring.

For Australian mean temperatures it was a year of two halves. Autumn temperatures were slightly below normal, but it was an exceptionally warm finish to the year. The last quarter (October-December) of the year was easily the hottest on record. Over the year as a whole, temperatures were 0.83°C above the 1961-90 average, making it the fifth warmest year on record.

2013, 2014 and 2015 have all ranked in the five warmest years on record for Australia. The last three years have also seen Australia’s three warmest springs, with 2015 falling just short of 2014’s record high. Australia’s 2015 temperatures were relatively modest by global standards, with the world set to have its hottest year on record by more than 0.1°C above ther previous hottest year (2014). Final global numbers for 2015 will not be available until later this month.

The warmth in Australia was especially exceptional in October. Nationally, temperatures were 2.89°C above the 1961-90 average, which in terms of degrees above average makes it the most extreme month ever experienced for Australian temperatures.

Most of the southern half of mainland Australia had its hottest October on record, with average maximum temperatures for the month more than 7°C above normal in parts of Victoria. Victoria’s October temperatures were about those of a normal December.

Melbourne had its earliest-ever spring day above 35°C, and Sydney its second-earliest. The heat during spring was associated with a number of major unseasonable fires across the southern states with loss of life and property. There was further extreme heat in December, with Mildura recording Victoria’s highest-ever overnight minimum temperature (31.9°C), and Victoria, Tasmania and South Australia all experiencing their hottest Decembers on record

2015’s warmth extended over most parts of the country, with temperatures above normal everywhere except parts of the interior northwest and southern Tasmania. The warmth was most pronounced in Western Australia and Queensland. Temperatures were 1.0 to 1.5°C above average over most of Western Australia outside of the Kimberley, as well as over most of southern and central Queensland, apart from the east coast from Mackay southwards.

It was the hottest year on record in parts of southern Western Australia and was the second hottest year for the State as a whole, whilst records were also set in Queensland in a region centred on Townsville and in parts of the central and southern interior.

One exception to the warmth came in winter, when it was rather cold over the southeast quarter of the country. Tasmania had its coldest winter since 1966 and Victoria its coldest since 1997, although Victorian temperatures were still only 0.26°C below average. The cold extended further north in mid-July, bringing the most significant snowfalls since 1984 to higher elevations in Queensland and northern New South Wales.

Winter in New South Wales was 0.22°C above average. The state has now had eighteen winters in a row with above-normal temperatures, an indication of how rare cold winters have become in recent years.

El Niño is expected to decline over the first half of 2016, although it remains to be seen whether it will transition directly into a La Niña event (as happened in 1998) or return to near-normal (neutral) conditions.

Historically, a declining El Niño typically has limited influence on Australian rainfall from January onwards, but is still associated with higher temperatures, especially in the first half of the year.