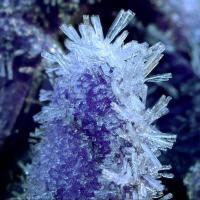 Spring frosts can have devastating impacts on crop yields in southern Australia, depending on when they occur during the different stages of plant growth.

In a recent study, we investigated trends in the frequency of frosts over two periods, from 1940-2011 and from 1981-2011 at long-term high-quality temperature observing stations in southern Australia from the Bureau of Meteorology. A frost day is defined here as a day where the minimum temperature at screen level (1.5m above the ground) is below 2 °C. This corresponds well with the occurrence of ground frost.

We found clear decreases in the annual number of frost days at all stations over the longer period from 1940-2011, consistent with expectations in a warming climate. However, more recently, some stations have shown an increase in frost days.

We investigated trends in each month from May to September.

During the other months, the average number of frost days in the south-west of Western Australia is low at a majority of stations.

To include a station in the analysis for a particular month, it was required to have a minimum of 3 frost days per month on average.

Our study showed that in south-eastern Australia, the observed increases in frosts could to a large degree be explained by the recent drying that occurred during the same period, known as the Millenium drought. During dry periods, reduced cloudiness leads to more cooling at night, and thus more frosts. Although we did not investigate this specifically in our study, this is also why frosts generally occur more frequently in south-eastern Australia in winter and spring during El Niño years.

The reasons for the increases in south west Western Australia were less clear. While there was some indication of a link to reductions in the number of wet days (a frequently used proxy for cloudiness), our results remained inconclusive regarding the cause of the observed increase in frost days. It is likely that due to generally low average numbers of frost days per month in SWWA, monthly metrics of wet days and cloudiness are less well suited to explain trends in frost days.

Further research taking into account other factors such as wind, humidity, circulation features, daily cloudiness and radiation data is required to help address this remaining question.

In south-eastern Australia, our research showed that the observed increases in frost days at some locations are strongly related to the Millenium drought and rainfall decline in this region. However, understanding the causes of this rainfall decline remains a topic of ongoing research.