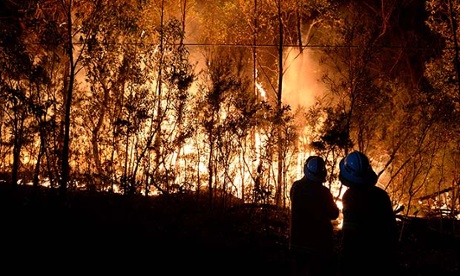 Successive seasons of high rainfall in some areas and a long, dry spell in others have delivered a mixed bag of increased bushfire threats for southern Australia this year.

A two-year rain deficit and a predicted warm, dry spring will increase fire risk in forested areas along the eastern seaboard and south-west Western Australia over the warmer months, the Bushfire and Natural Hazards Co-operative Research Centre has predicted.

But higher-than-average rainfall has increased the risk of grass fires on the Nullarbor Plain, in the mid-west and desert regions of WA and much of South Australia’s Eyre peninsula and mid-north.

“The forested area in the east that covers southern Queensland, most of eastern NSW and down into Victoria is largely driven by rainfall deficits over a long period of time,” centre CEO Dr Richard Thornton said.

“That is leading to much higher-than-normal levels of potential for fire in the coming year.

“The south central parts of WA, through the mid-west and the desert region, is dominated by a fairly wet period that has caused the grass to grow in this area.”

Thornton said it was unlikely that even big rain events like those experienced in Queensland and NSW in recent weeks would alter the outlook.

“We’ll always get rainfall somewhere. What it will do is delay the onset a bit in general, but a few good, hot days will dry that out,” he said.

“It’s never too early to start to prepare. There is physical preparation that you can do and there is a bunch of other things you can do, like your fire plans,” he said.

Queensland: Drought has curbed grass grown and grass fire risk but forest fuels are drying out. Above normal fire potential in much of south-east.

Tasmania: Above normal potential for fires expected only in Swansea/St Helens/Fingal region.