Call for scientists to lead action on climate change 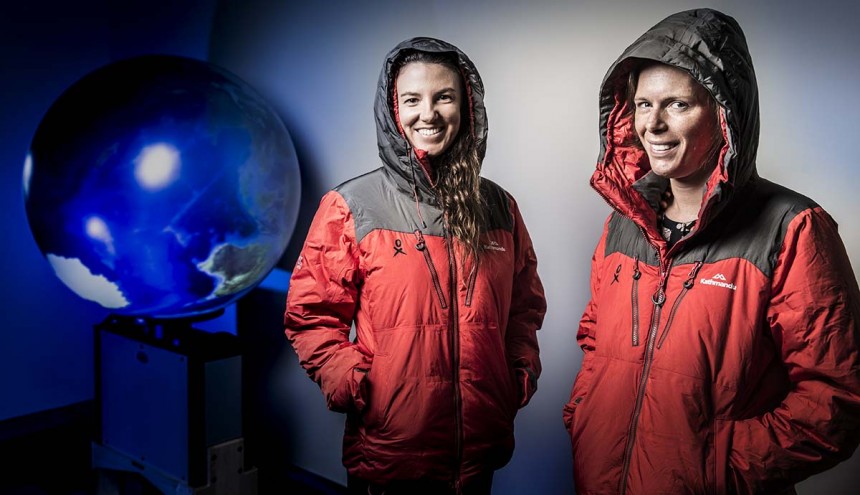 In an opinion piece in the prestigious scientific journal Nature, University of Wollongong researcher Dr Sarah Hamylton writes about the emotional challenges facing environmental scientists as the effects of climate change become more obvious and more widespread. She urges more scientists to take a stand on the issue.

In the article, “Make your science count”, Dr Hamylton (pictured above right with UOW PhD student Rachelle Balez) says that sustaining commitment to research projects can become more and more difficult as environmental problems caused by carbon emissions continue unabated and global progress in reducing the use of fossil fuels remains limited.

“The impacts of climate change are real. Plant and animal habitats are changing, glaciers are melting and heatwaves and floods are becoming more frequent,” Dr Hamylton writes in the article.

“All this causes me to question the utility of my work as an environmental scientist.

“Reports that two mass coral-bleaching episodes in 2016 and 2017 had killed around half of the Great Barrier Reef stopped me short. Having spent the past decade modelling the impacts of climate change on coral reefs, I feel as if much of that work is now futile.”

However, Dr Hamylton, a Senior Lecturer in Geographic Information Sciences in UOW’s School of Earth and Environmental Sciences, argues scientists have a responsibility to lead change and should use any negative emotions to galvanise themselves into action.

Dr Hamylton said a real turning point for her was reading Anna Krien’s Quarterly essay “The Long Goodbye: Coal, Coral and Australia’s Climate Deadlock”, which neatly demonstrated how the fate of the Great Barrier Reef is embedded in political and economic dynamics.

In Australia, she said, decisions on proposals to mine coal in the Galilee Basin or develop solar thermal plants in Port Augusta are widely reported as being influenced by political donations, royalties and taxes.

The problem of coral bleaching on the Great Barrier Reef therefore becomes a people problem, as opposed to an environmental science problem. It weighs heavily on the national conscience and has implications for Indigenous communities, tourism operators, fishers, farmers, miners, workers, local councillors and federal politicians.

“Acknowledging this provides comfort to reef scientists.” Dr Hamylton says. “Importantly, it prompts us to think about potential alternative roles in which we can make a difference.”

She is using her own involvement in Homeward Bound, a global environmental leadership program for women in science, to explore how scientists can join with others to bring about change. Over 10 years, Homeward Bound aims to take 1000 women through 12 months of leadership development, culminating in a three-week voyage to Antarctica, where female scientists develop their clarity, confidence and strategic vision for acting together on climate change.

“It has helped me to build my self-awareness, and use forms of expression that resonate with my personal values … in my reef work, I’ve found ways to add scientific authority to the argument for resisting the coal industry,” Dr Hamylton writes.

Dr Hamylton and UOW PhD student Rachelle Balez, who is also taking part in the Homeward Bound program, depart for Antarctica on 13 February.

“We haven’t yet stepped on the boat, but already it’s been quite a journey. I’m pleased to report that the University of Wollongong has been behind both Rachelle and I taking part in Homeward Bound; our colleagues, Faculty Dean, Heads of School and our Deputy Vice-Chancellor of Research have all come together to show their support for women in science, which really makes a difference,” Dr Hamylton says.