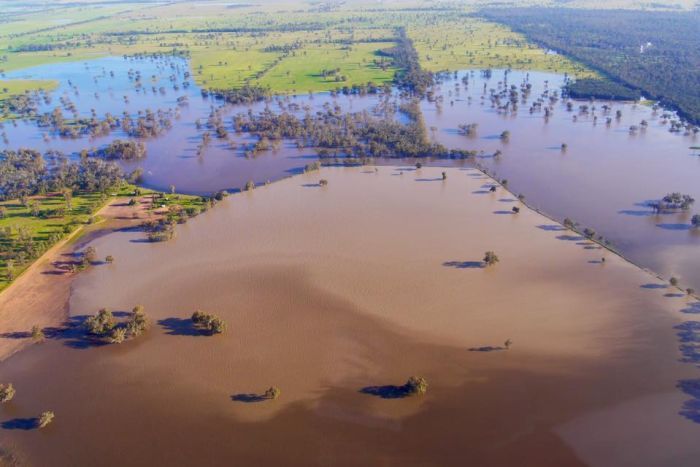 PHOTO: There are calls for more gauges to give more accurate data about floodwaters. (ABC News: Gavin Coote)

There are calls for more flood gauges across the Lachlan Valley in central west New South Wales after concerns about a lack of accurate data across areas affected by flooding.

Water from Lake Cowal is filling large swathes of country south of Condobolin and converging with the flooded Lachlan River, which has been experiencing major flooding over the past month.

The Lachlan Shire Council is beginning to count the cost of the damage and is estimating its damage claim could reach $10 million.

But the council said there were no gauges to determine the impact of continual flooding in the region’s south around Lake Cowal.

The State Emergency Service’s local controller Keith Dawe said this needed to be addressed in order to improve the alert systems.

“Particularly that Lake Cowal area with the huge uncertainty of that, and just the difficulties it’s caused,” Mr Dawe said.

“For instance, with the Newell Highway having been diverted, I’d imagine there would be some expectations further east of here that they’d like a bit more notice of what’s happening in that area too.”

Mr Dawe said they have had to rely on aerial photography and patrols to monitor levels around the southern areas of the shire.

He said a more accurate system was needed.

“Sometimes you’ve got to go through one causeway to get through to another one, and the first one stops us,” he said.

“A bit of gauging on some of the main waterways probably would make it easier for a tracking and predicting what’s happening.”

PHOTO: Water from Lake Cowal is filling large swathes of country south of Condobolin, but the Lachlan Shire Council says there are no gauges to determine the impact. (Facebook: Brad Shephard)

The issue has also been highlighted in a letter landowner John Ridley has sent to the Lachlan Shire Council, as well as the neighbouring Forbes, Bland and Weddin councils.

“We need to know how much water and when flood waters are coming down the valley when these flood events occur,” the letter by Mr Ridley read.

“There are many people and farms who need to know this information along the greater Bland catchment, Lake Cowal and Nyrang Cowal … some 50 to 60 farms and communities of Carragabal, Mardsen, Lake Cowal, Corinella, Moonbi and Borambil.”

The Lachlan Shire mayor John Medcalf said it was an issue that has been raised with the council and would be investigated.

“I think we really need to have a look at it, there’s no question about it,” Cr Medcalf said.

“We definitely need to sit down and have a look at it when we do the wrap up of this flood. We’ll definitely look at lobbying to help that situation, because if we can completely get an accurate picture of what is happening.”