When a climate extreme event with notable impacts comes along, a natural question arises – “did anthropogenic climate change have a hand in this?” The current drought in eastern Australia and extreme spring bushfires are very high-profile cases. Other questions may also arise such as “did factors that cause climate variability such as El Niño play a role?” Rather than just relying on speculation or hunches, the science of climate event attribution has emerged to address these questions in a more objective way. So, what can this science offer us, and where are the limits?

We have always lived with large climate variability in Australia. We experience heatwaves and other heat events, cold outbreaks and frosts, extreme bushfire conditions, hail, floods, droughts, marine heatwaves, storms such as East Coast Lows or tropical cyclones, coral bleaching events and more. We have experienced years like 2010-2011 when there was so much rainfall over Australia it contributed to lower global sea-levels. Usually though, much of the country is very dry. Underlying this variability, we know that the globe is warming due to increasing levels of atmospheric greenhouse gases, and this is affecting the entire climate system, including the climate and weather extremes.

Quantifying how much climate change has affected the magnitude or probability of an individual event becomes a ‘signal to noise’ problem. This means we need to carefully tease apart any climate change ‘signal’ from the ‘noise’ of natural variability. Doing so is not just of academic interest, it can be used to better plan for and respond to current and future extreme events.

The old phrase “climate is what you expect, weather is what you get” suggests that from a climate change point of view we can talk about the changes to the climate statistics, but that commenting on an individual event is not possible. In practice this was the case for a long time, but the field of event attribution emerged in the early 2000s aiming to do just this. Using this approach, we have been able to link the increased probability of occurrence or magnitude of many individual extreme events to climate change. How?

In medicine we can talk about differences in risks between populations – such as the increased risk of lung cancer in the smoking population compared to non-smokers. This principle can be applied to the risks in a world with and without climate change – looking at the statistics of the risk now, and in a world where we hadn’t altered the climate. But we don’t have a population of multiple Earths and we don’t have a whole population of counter-factual Earths without climate change to compare against, so what can we do?

Well, we can look at long climate records from observations and paleo-climate archives that can give us insight into the occurrence of these events in the past climates and compare this to the present. However, since extreme events are rare, by definition, and the climate record may be incomplete, we are limited in the number of cases that can be captured in the ‘present’ climate. Therefore, we often need to do further work to complement this observational approach.

Another approach is to look at many simulations of the Earth’s climate in sophisticated computer models – simulating the world of today and the world without climate change. Effectively, creating a population of multiple Earths where climate change has occurred, and another population of Earths where it hasn’t. These models capture the dynamical motion of the air, ocean and ice and how they interact with the land to bring rain and other weather, as well as the chemistry of the atmosphere and biogeochemistry of the land and ocean and their interactions with climate. Importantly, these models can reproduce many aspects of the climate and how it responds to drivers like greenhouse gasses, so we know they can be useful. Another modelling approach is to use models similar to weather-forecast models to forecast the event, and then alter the initial conditions to how they might have been in a low-carbon climate and re-forecast the event. This creates two ensembles that can be compared.

Model simulations are a powerful tool for exploring the answers to these questions, but we need to frame the questions in the right way, and critically evaluate the models to understand the limits of what we can do.

For example, we always get heatwaves but in a warmer climate a heatwave of a given intensity is more likely than in a cooler climate unless the variability changes significantly. Or to pose it another way, a given heatwave was hotter than it would have been without climate change. So, useful questions to ask of event attribution are “Was the recent event made more likely due to climate change? Was the event more severe than it would have been without climate change? By how much?”

Also, we need to look critically at the actual drivers of the extreme event and define the question appropriately. For example, an extreme rainfall event may have been delivered by a storm such as an East Coast Low, so to gain insights into this extreme we need to know about the effect of climate change and climate drivers such as El Niño on this phenomenon specifically, and not heavy rainfall from other weather patterns such as cold fronts.

We also need to look out for confounding factors when we consider the drivers of an extreme event, and particularly the impacts of an extreme event. Changes to built infrastructure, resource management actions, agricultural practice developments and changes to the land cover can all change the extreme event or its impact. Changing the landscape to have more concrete can affect the intensity of flash flooding and the heat experienced due to urban heat island effects. When attributing the impact of an event, we need to carefully distinguish between the hazard and our exposure to the hazard to the overall impact. For example, a tropical cyclone passed through the Gold Coast in 1954, if it passed through again today there would be far more buildings in the path. In this way, the changes to risk exposure can be more important than the changes to the hazard itself to the overall impact.

How is event attribution done?

To perform event attribution reliably, we need three crucial ingredients: long records of reliable observations, a good understanding of the full range of physical drivers of the extreme event and models that can adequately simulate the relevant processes. Deficiencies in any one of these factors limit what can be attributed with confidence.

An examination of observed records is an important first step, to consider the wider historical context of an event. Following this, various modelling systems run with current conditions or conditions prior to industrialisation can be evaluated against these observations and then examined. There are various technical approaches to producing these model outputs. We can never have a perfect simulation of the world, but model simulations can give robust information for some questions. A critical assessment of the model skill and capabilities needs to be made, and ideally multiple models and modelling systems need to be applied to look for agreement or difference.

So, what can we do well and what are the limits?

Some climate variables, like rainfall or frost, are more variable over time and space than temperature and have a higher ‘noise’ that can ‘hide’ the signal. However, some of the relevant physical mechanisms of climate change are well understood and can help us be more certain of the signal emerging from the noise. These include the fact that there can be more moisture in warmer air, meaning there is more water available to fall as rain, and also some changes to atmospheric circulation driven by a warmer world. This means that we can say something about rainfall extremes that rely strongly on these factors. However, the full range of possible influences needs to be considered. For example, climate change may contribute to an increase in extreme rainfall through increased water vapour in a warmer atmosphere, but the effect of climate change on the particular weather pattern also matters and can in fact be more important than the change to water vapour. The drivers of spring frost risk are similar, where rising temperatures lowers the risk in general but the specific conditions that drive frosts such as clear nights can offset or override the effect of this background warming.

What about bushfires and drought? Well, it’s complicated. 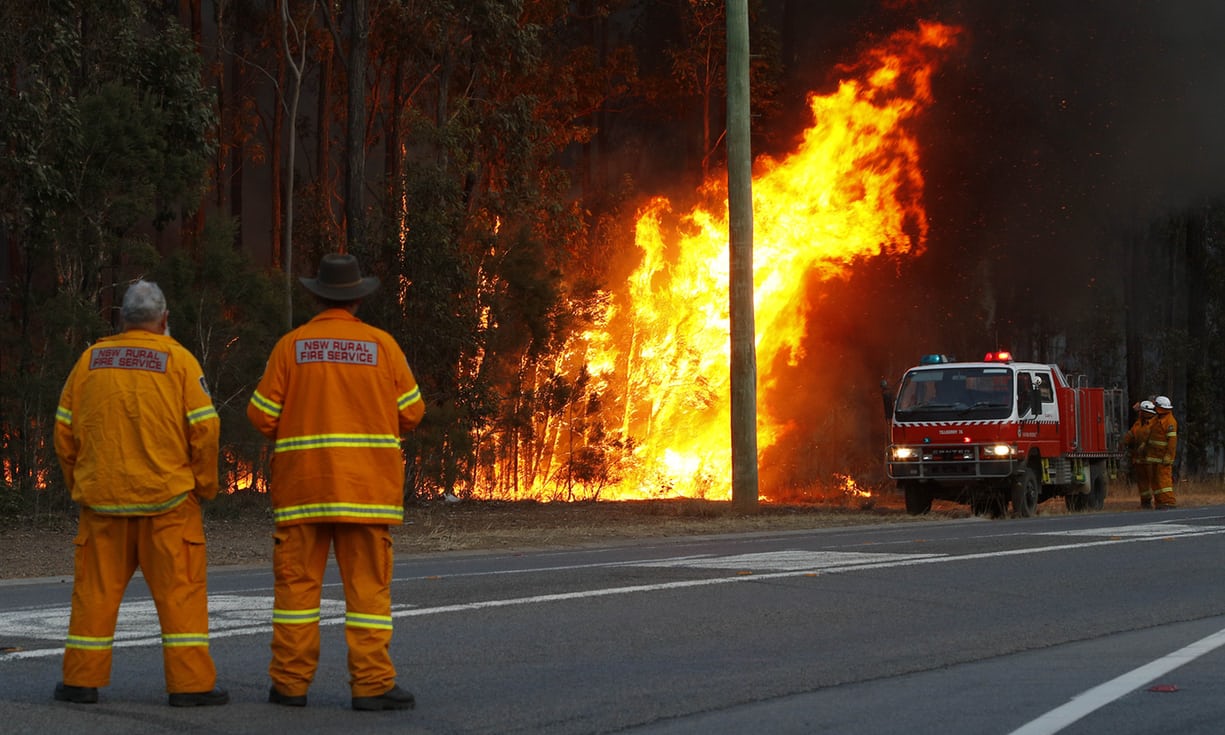 Droughts can be long, so we need long data records to get a reliable context. The drivers of drought are complex and not completely understood, and long droughts are challenging to simulate in models. These are all reasons for caution. In terms of extended rainfall deficiencies as a main driver of drought, we understand the influence of climate change in those regions where we know climate change has altered the large-scale atmospheric circulation and the rainfall patterns, for instance in south-west Australia. In other regions the drivers can be more complex, and it can be harder to determine possible links with climate change. These cases pose interesting research problems. Given the changing climate, droughts are likely to differ from how they appeared in the climate of 50 years ago. Something we can say with certainty is that droughts are now warmer due to climate change, and this increases their impacts both as a component linked to increasing evaporation and adding to the heat stress on animals and plants.

Overall bushfire risk depends on fuel type, fuel amount, fuel dryness, weather conditions and ignition sources including lightning and humans. Fuel and ignitions are partly dependent on fire management practices, while fuel amount and dryness also depends on the weather conditions in the months leading up to the fire. There is now considerable evidence that climate change affects the prevalence of intense fire weather conditions on fire days and the heat prior to fire events, and these are important elements of our understanding of factors affecting bushfire severity and likelihood. Climate change may also affect the low rainfall in the months prior to the fire that pre-conditions the landscape for fires as well, which seems likely in Tasmania for the fires in the 2015/16 summer. But the overall risk is specific to each major fire event, so careful research is needed to identify and assess the different components of the overall risk in each case, and the role of climate change of any component.

This information is useful and important

When looking to adjust our infrastructure, management, and systems to manage climate risk, attribution of events can be useful in two ways. First, it tells us what climate changes we have already experienced that we need to adapt to right now. Attribution can tell us whether an extreme event was just a rare occurrence expected from climate variability, or whether the likelihood has increased, and we should expect them more often. This helps us to correctly calibrate our climate risk.

Second, attribution of the anthropogenic component in climate and weather extremes is a useful context to interpret future climate projections. This helps us see where we are tracking in terms of climate change relative to historical change and possible future change. This can then guide policy both on emissions reductions to limit future climate change, and to adapt to the inevitable further climate change we will experience.