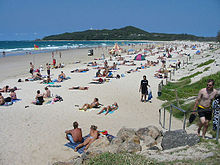 Australia’s summer is officially over, and it’s certainly been a weird one. The centre and east of the continent have had severe heat with many temperature records falling, particularly in New South Wales and Queensland.

For much of the country, the heat peaked on the weekend of February 11-12, when many places hit the high 40s. That heatwave, which mainly affected NSW, was quickly attributed to climate change. But can we say whether the whole summer bore the fingerprint of human-induced climate change?

The NSW record average summer temperatures can indeed be linked directly to climate change. We have reached this conclusion using two separate methods of analysis.

First, using coupled model simulations from a paper led by climatologist Sophie Lewis, we see that the extreme heat over the season is at least 50 times more likely in the current climate compared to a modelled world without human influences.

We also carried out an analysis based on current and past observations (similar to previous analyses used for record heat in the Arctic in 2016 and central England in 2014), comparing the likelihood of this record in today’s climate with the likelihood of it happening in the climate of 1910 (the beginning of reliable weather observations).

Again, we found at least a 50-fold increase in the likelihood of this hot summer due to the influence of human factors on the climate.

It is clear that human-induced climate change is greatly increasing the likelihood of record hot summers in NSW and Australia as a whole.

When we look at record summer heat, as represented by average maximum temperatures, we again find a clear human fingerprint on the NSW record.

The Sydney and Canberra heat

So what about when we dig down to the local scale and look at those severe heatwaves? Can we still see the hand of climate change in those events?

As climate varies more on local scales than it does across an entire state like NSW, it can be harder to pick out the effect of climate change from the noise of the weather. On the other hand, it is the local temperature that people feel and is perhaps most meaningful.

In Canberra, we saw extreme heat with temperatures hitting 36℃ on February 9 and then topping 40℃ for the following two days. For that heatwave, we looked at the role of climate change, again by using the Weather@home model and by comparing past and present weather observations.

For Sydney, which also had extreme temperatures, especially in the western suburbs, the effect of climate change on this heatwave is less clear. The observations show that it is likely that climate change increased the probability of such a heatwave occurring. The model shows the same, but the high year-to-year variability makes identifying the human influence more difficult at this location.

We are seeing more frequent and intense heatwaves across Australia as the climate warms. While the characteristics of these weather events vary a great deal from year to year, the recent heat over eastern Australia has been exceptional. These trends are projected to continue in the coming decades, meaning that the climate change signal in these events will strengthen as conditions diverge further from historical averages.

Traditionally, Sydney’s central business district has had about three days a year above 35℃, averaged over the period 1981-2010. Over the decades from 2021 to 2040 we expect that number to average four a year instead.

To put this summer into context, we have seen a record 11 days hitting the 35℃ mark in Sydney.

All of these results point to problems in the future as climate change causes heatwaves like this summer’s to become more common. This has many implications, not least for our health as many of us struggle to cope with the effects of excessive heat.

Some of our more unusual records

While the east battled record-breaking heat, the west battled extreme weather of a very different sort. Widespread heavy rains on February 9-11 caused flooding in parts of Western Australia. And on February 9 Perth experienced its coldest February day on record, peaking at just 17.4℃.

Back east, and just over a week after the extreme heat in Canberra, the capital’s airport experienced its coldest February morning on record (albeit after a weather station move in 2008). Temperatures dipped below 3℃ on the morning of February 21.

The past few months have given us more than our fair share of newsworthy weather. But the standout event has been the persistent and extreme heat in parts of eastern Australia – and that’s something we’re set to see plenty more of in the years to come.

Original article posted on The Conversation, 2nd of March 2017 (Link)