Climate science on chopping block as CSIRO braces for shake-up 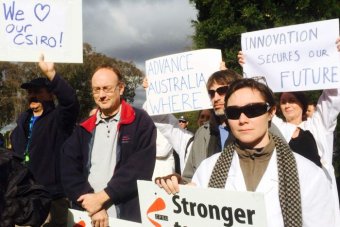 The organisation will attempt to redeploy as many staff as possible into emerging areas such as data science, but there are likely to be redundancies in the process.

CSIRO chief executive Larry Marshall said the changes would see the organisation move away from measuring and monitoring climate change, to instead focus on how to adapt to it.

“Some of the climate scientists will be able to make that transition and some won’t.”

Dr Marshall said the shake-up was about renewal for the organisation and addressing the low turnover rates of staff.

“On the good side that means people love working for CSIRO but on the bad side most companies have much higher turnover than we do,” he said.

“The good thing about turnover is it creates a career path for junior scientists to aspire to.”

In a statement, a spokesman for Science Minister Christopher Pyne said:

In 2014, the Federal Government slashed more than $110 million from the organisation’s budget, prompting national protests.

The CSIRO Staff Association estimated that 1,400 jobs had been lost at the organisation in the past two years.

Malcolm Turnbull committed $90 million to the CSIRO to support increased commercialisation of research.

He also announced $75 million of funding to a CSIRO business unit known as Data61, which will focus research on areas such as cybersecurity and robotics.

At the time, Mr Pyne said organisations like the CSIRO were “among the best in the world”.

Reacting to the announcement of a fresh round of cuts, Greens MP Adam Bandt hit out at the Prime Minister.

“Malcolm Turnbull is an innovation imposter if he allows these reported cuts at CSIRO to go ahead,” he said.

“In Paris, the Prime Minister said research and innovation are key to dealing with global warming, yet here at home the Liberal Government’s cuts to the CSIRO mean that hundreds of climate scientists could be getting the axe.”