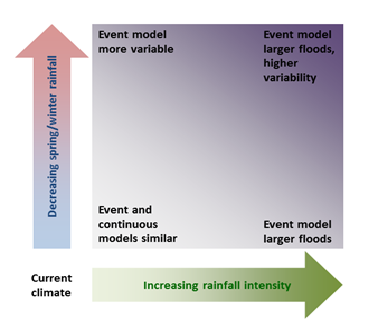 Currently, flood risk management practitioners in Australia mostly use event-based models (simulating a single flood event in isolation) as opposed to continuous models (simulating runoff dynamically over time). However, there is a commonly held belief in the hydrology community that future changes in antecedent conditions will favour a move towards continuous models, as they can dynamically account for catchment wetness.

In a recent paper published in Advances in Water Resources Journal, we undertook to test this assumption by comparing an event-based model (WBNM) and a continuous model (GR4J) under increasingly severe climate change scenarios for a catchment in Southern Australia. Both models are commonly applied in Australia and they were calibrated to optimise their performance under current climate conditions.

A weather generator was used to create climate series representing a range of scenarios with incrementally decreasing winter/spring rainfall and increasing extreme rainfall intensity, as per climate projections for Southern Australia. We simulated each series in GR4J and identified the 5% annual exceedance probability (AEP) flood from the results. We then simulated the associated rainfall event in WBNM, giving GR4J and WBNM results for the same 5% AEP flood. Patterns in model performance divergence could then be examined over the full range of climate scenarios. The resulting patterns in relative flood model results are illustrated below.

The results revealed that under drier conditions, WBNM produced more variable outcomes than GR4J. This was linked to greater variability in antecedent conditions and indicated an advantage in using continuous simulation under drier future climate scenarios. For some modelled events, the losses in WBNM were ‘too small’ for the drier conditions and flood magnitudes were overestimated. Intuitively, it may seem sensible to increase the initial loss in an event-based model to account for drier conditions in the future. However, we could not improve WBNM performance under the drier conditions through adjustment of the initial loss parameter. The results became less consistent with GR4J as the conditions became drier, regardless of the WBNM loss parameters selected.

On the other hand, when increasing rainfall intensity was simulated and antecedent conditions became wetter, WBNM showed a tendency to simulate larger flood peaks and volumes than GR4J. This is the opposite of what we would expect if wetter antecedent conditions, which would cause the calibrated WBNM losses to be ‘too large’, were dominating the performance divergence. The dominant factor causing larger flood peaks in WBNM was found to be GR4J’s assumption of linearity in catchment response, while WBNM contains a nonlinear storage-discharge relationship. As it is widely accepted that true catchment response is nonlinear, this result suggests an advantage in accounting for nonlinearity when scaling up rainfall depths for climate change assessments. The larger flood volumes simulated in WBNM were attributed to differences in how the two models represent precipitation losses to the soil.

Our results highlight the importance of considering all aspects of model structure when assessing suitability for future flood risk assessments. For cases where drier average conditions and increased extreme rainfall are projected, our analysis suggests continuous models that account for catchment nonlinearity may improve future flood prediction. Overall, our conclusions caution against a blanket shift towards continuous simulation without detailed consideration of other model structural differences.