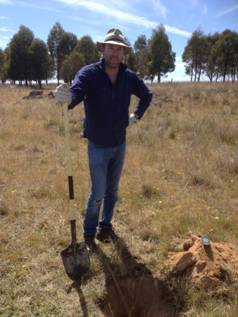 The Australian Cosmic Ray Sensor Network (CosmOz) is a near-real time soil moisture measurement network. This is the 3rd edition of our monthly update on progress within the network.

Welcome to the last CosmOz newsletter for 2012. This month we cover the 3rd COSMOS workshop which was held in Tucson Arizona last week, update you on calibration across our probe locations and look at some interesting effects of cyclones on cosmic-ray probe signal.

During the week starting 10th December, Dave McJannet attended the 3rd COSMOS workshop and gave an invited presentation about the CosmOz network. This is the first COSMOS workshop to bring together researchers from around the world and there were participants from USA, Australia, Germany and Denmark. The enthusiasm and progress around the cosmic-ray technique was clear from the outset with different groups trying to break new ground in technique application. While the US is seen as the biggest player with 50-60 probes installed, German research groups are emerging as a major adopter of the technique with a recent order for 60-70 probes being placed as part of the TERENO project. The French are also becoming one of the major users of the method through application of the technique to determination of snow pack for hydro-power predictions.

One of the interesting discussion points was a goal to strive for estimates of soil moisture profile rather than just average moisture and measurement depth – this would be a major advancement in the use of the technique. One group is also working on using cosmic-ray probes to determine biomass as this too is related to hydrogen content which the cosmic-ray probe is essentially measuring. It was also interesting to hear some of the synergies between COMSOS and major long-term funded monitoring projects in the US like AmeriFlux, NEON, the Climate Reference Network and Critical Zone Observatories.

Detailed discussion around satellite imagery validation and calibration and data assimilation approaches also took place. For those interested the agenda for the workshop and links to the presentations can be found here:

A big thanks goes out to Andrew Palmer for his efforts in collecting soil samples for calibration of our probes located at Daly, Baldry, and Griffith (wet and dry calibrations). Andrew has collected and processed more than 450 soil samples and his time around the drying oven have earned the title ‘Master Chef’. Also a big thanks to those who helped Andrew at each of the sites. There has also been calibration progress at the Yanco site thanks to the efforts of Sandra Monerris-Belda and team from Monash Uni. Further calibration sampling is proposed for the Gnangara site in WA too, which is proving to be an interesting challenge because of the persistently low soil moisture content. With these calibrations complete we will be able to deliver continuous moisture measurements for each site.

The number of cosmic-ray particles reaching the Earth’s surface is partly determined by atmospheric thickness. The more material the particles need to travel through the less particles that will reach the surface. What this means is that cosmic-ray probe measurements need to be corrected for changes to atmospheric thickness to remove variation that is not caused by near surface hydrogen (mostly as water). Atmospheric pressure is essentially a measure of this atmospheric thickness so it is used for this purpose. An ideal situation to demonstrate the importance of the atmospheric pressure correction took place when Cyclone Yasi crossed the Queensland coast in early 2011. The cyclone brought with it a large drop in atmospheric pressure which meant that probe count rates needed to be adjusted by as much as 15% to correct them to reference levels (Figure 2). Luckily this correction is very simple to apply and pressure measurements are made at each cosmic-ray probe for this purpose.

The US based COSMOS team host a regularly updated list of cosmic-ray probe related publications. Those interested can find publications and links here:

As we move in 2013 and our calibration procedures are finalised, we are calling for those responsible for any of the CosmOz probes to show us some of their data and discuss how they are using the cosmic-ray probes in future newsletters. Let us know if you have anything interesting to share.

Have a great Christmas break and all the best for 2013,