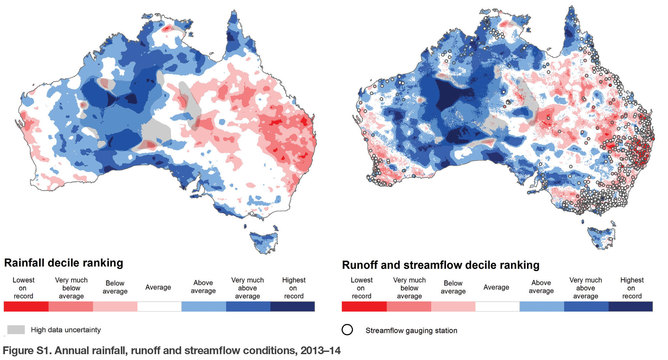 The Millennium Drought ended more than five years ago, but several years of below-average rainfall and El Niño have brought drought back to many parts of Australia. Our latest report on water in Australia shows rainfall is continuing to decline in eastern Australia and increase in the north.

However in urban areas, where water use has not changed significantly since the Millennium Drought, more water is available for use thanks to technologies such as desalination and recycling.

In a recent article on The Conversation, the Bureau of Meteorology put the case that Australia can now better manage water resources using new water information capability.

Last week the Bureau released a new assessment report on our national water availability and use. Water in Australia 2013–14 examines climatic conditions and the physical hydrology to create the most recent national assessment of Australia’s water resources.

The main findings are outlined below.

Since 1950, rainfall has increased in Australia’s north and northwest, but declined along the west coast and most of eastern Australia. This pattern was reflected in 2013–14.

In southern Queensland and northern New South Wales, a severe drought, which started in 2012, continued in 2013–14. As expected, streamflow in these areas was very much below average in drought-impacted areas. The volume of groundwater stored in aquifers is very large compared with surface water and responds more slowly to external influences. As a result, most bores across the country had average groundwater levels in 2013–14.

In South Australia and Queensland, more than one-third of all bores had an above-average level. Below-average groundwater levels were present in 5–20% of bores in each State and Territory.

Australia has extensive water supplies and their use is managed by various institutional arrangements. Water availability is being increased by using recycled and desalinated water. At the same time, greater protection is being afforded to the environment through the purchase of entitlements from water users and investments in water-saving infrastructure.

*Plants with a capacity greater than 50 ML/year only. NB: Overlap between categories means that these amounts cannot be added together for a total figure.