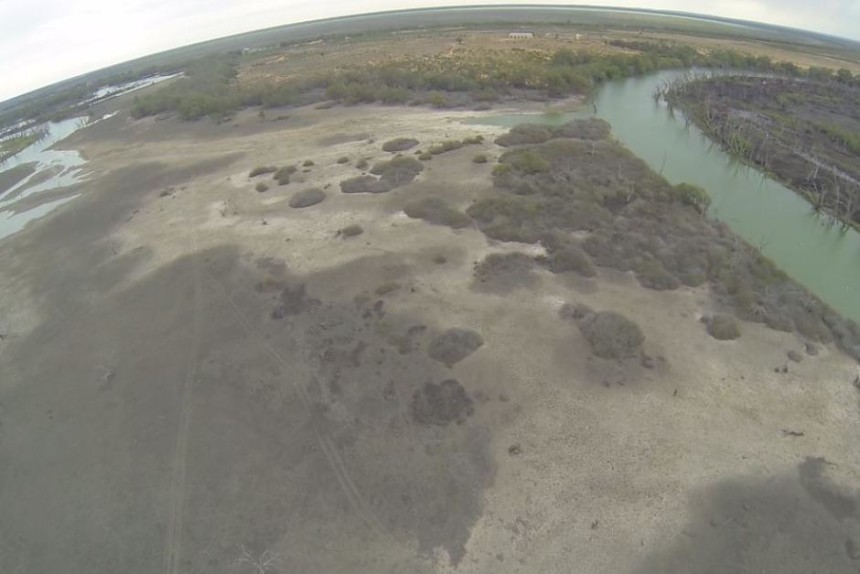 A stocktake of waterbirds in eastern Australia has shown the lowest breeding level on record.

The Darling River was just one of the water systems aerially surveyed to gauge the health of waterbirds’ populations.

The annual aerial survey, conducted by the Centre for Ecosystem Science at the University of NSW, confirmed a dramatic long-term decline in the number of waterbirds.

Director Richard Kingsford said that over 33 years of counting, average numbers had fallen more than 60 per cent.

The trend continued in 2015 with a further drop compared to the previous three-to-five-year period.

“This is the second lowest number of waterbirds we’ve seen in that 33-year period and it’s symptomatic of the real impacts of this drought that’s occurring across the eastern half of the continent,” Professor Kingsford said.

The survey covered all the major rivers, lakes and wetlands from Queensland down through New South Wales, Victoria and South Australia, including the Murray-Darling Basin and the Riverina.

The team found the Macquarie Marshes and Lowbidgee wetlands were only partially filled, most rivers in the Murray-Darling Basin were also relatively dry, with little wetland habitat on their floodplains, and all the large lakes in the Menindee system were dry.

The Lake Eyre and Cooper Creek wetlands were mostly dry except for a small area to their east, while important wetlands in the Lake Eyre Basin including Lakes Galilee, Yamma Yamma, Torquinnie and Mumbleberry were dry.

Most alarmingly, the total breeding index of all 50 species combined was the lowest on record and well below the long-term average.

Research fellow Kate Brandis said that without water swelling the wetlands, the birds were unable to thrive.

“Many of the waterbird species actually breed on vegetation that’s been inundated by the water and so if there’s not that nesting habitat where they feel safe then they don’t breed,” Dr Brandis said.

In fact, significant breeding was recorded in just one location.

Breeding species richness was also the lowest on record, with only black swans producing young, in low numbers.

“As we’ve seen over the long term with the aerial survey, we have a decline in waterbird numbers across the Basin and eastern half of Australia, so fewer breeding opportunities will only increase that decline,” Dr Brandis said.

According to Professor Kingsford, it was not only the drought affecting water availability.

“The long-term decline in waterbird numbers we primarily see in the Murray-Darling is symptomatic of the over-allocation and river regulation, the building of dams and diversion of water that’s occurred over that period,” he said.

“Very often in the past we’ve considered our rivers as just pipes for delivering water for agricultural communities.”

That water has long been used to irrigate the crops which feed much of Australia.

But this year, the Murray-Darling Basin Plan quarantined some of the water, specifically for the environment.

“This particular dry period is different to every other dry period in the sense that we’ve had environmental flows going into some of our wetlands, so there are oases for these waterbirds — in places like the Macquarie Marshes, the Lower Lakes on the Coorong and Hattah Lakes — and they’re very important in terms of keeping things ticking along,” Professor Kingsford said.

“The big question is how much water needed to go back and whether or not we see at least an arresting of that decline.”

“Some environmental flows target fish and fish spawning opportunities or riparian vegetation maintenance so they’re not all targeted for waterbirds and waterbirds are really specific in their requirements, so unless the flow is big enough and long enough then they won’t breed,” she said.

A barometer for the ecosystem

“For these wetlands, they rely on that water staying around so animals and plants can go through their life cycles, but if you’ve got less of the water actually coming in at the top end and when it gets to the wetland there’s a high evaporation rate then it’s really challenging in the long term as well,” he said.

“So a whole series of targets have been set and the big challenge is: did we get enough water for the environment over the next 15 to 20 years?”

He warned that if the regulators did not find the right balance, the wider community would pay a hefty price.

“We know in the millennium drought, for example, when there wasn’t enough water for the Lower Lakes and the Coorong, governments had to put their hands in their pockets to spend $2 billion to actually rescue that system,” Professor Kingsford said.

“We currently have a dredge parked in the mouth of the River Murray which is trying to keep it open — a service that the environment used to do for nothing, and that’s costing taxpayers up to $100,000 a week.”

He said the birds were a barometer, indicating declining health of the whole ecosystem.

“The Government has invested more than $12 billion in the Murray-Darling Basin Plan and investing in the monitoring to check how we’re going is equally important.”