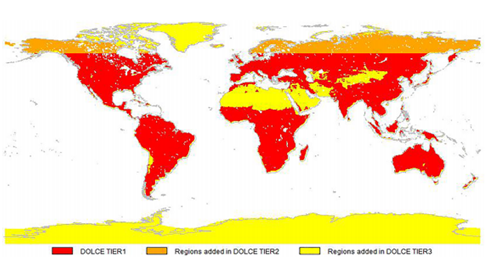 Quantifying evapotranspiration (ET) is key to understanding the water budget at the regional and global scales. At the site scale, flux tower networks provide direct observations of ET, however, both precipitation and streamflow are monitored with wider networks than the flux tower networks which makes evapotranspiration one of the least observed variables. Also, setting up flux towers is expensive and labour intensive, therefore it is impracticable to cover the landscape with flux towers to estimate ET very well. At a larger scale, several gridded ET datasets have already been developed. Most of these were derived by using modelling schemes that involve an estimate of net radiation or gridded forcing products that are typically based on reanalysis product. Many components of the gridded forcing (e.g. surface air temperature, precipitation, radiation components and vegetation properties) can be directly inferred from remote sensing observations, however ET cannot be directly observed from space.

Each of the existing ET estimates, therefore, involve a lot of assumptions and it is usually very hard to quantify the error of these assumptions and assess the meaningfulness of any error bounds. Recently, several inter-comparison studies tried to evaluate the existing ET products, but it remains unclear which of them provides the most reliable estimates. In each of these evaluation studies, flux tower data provide ground truth for gridded ET datasets by comparing grid cell values to those measured on site. However, there is an obvious scale mismatch between the fetch of flux tower measurement and the area covered by the grid cell of a model, which has not been addressed in the previous studies.

To overcome some of these issues we (Sanaa Hobeichi, Dr. Gab Abramowitz, Prof. Jason Evans, and Dr. Anna Ukkola) developed a new monthly global gridded ET product called DOLCE (Derived Optimal Linear Combination Evapotranspiration), with a spatial resolution of 0.5 degrees and monthly temporal resolution for the period 2000–2009. To derive DOLCE, we implemented a novel weighting method that combines six existing ET products in a way that accounts for both performance differences and dependence between the constituent products. We constrained the weighting using observational data from 159 flux towers and calculated time variant error variance estimates based on the discrepancies between the weighted mean and the observational data.

The paper, published in the Journal of Hydrology and Earth Systems Science, showed that DOLCE is in better agreement with tower-based observations than ten different existing global ET datasets for a range of metrics. We also showed that despite the scale mismatch between the flux tower and the grid cell, the ensemble of flux towers as a whole can provide information about the grid cells that contain them, and the representativeness of the point scale to the grid scale is enhanced by considering flux tower sites that lie in grid cells where the dominant land cover matches the land cover associated with the flux tower.

The weighting approach that we implemented can take advantage of positive features of the individual products and reduce their limitations. It also offers an opportunity for improvement as more flux tower data and new gridded ET products become available. The same weighting approach can be used to develop monthly global gridded estimates of the complete water and energy budgets. DOLCE provides a valuable addition to currently available ET estimates and it can be used as a tool for model evaluation.