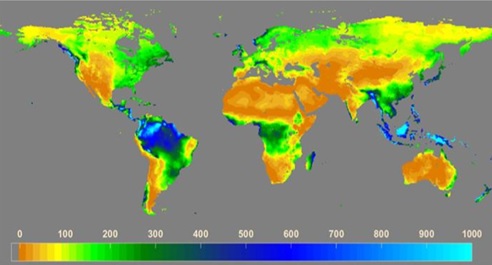 Groundwater serves as the primary source of drinking water for more than 3 billion people around the world. The year-round availability and low infrastructure requirements like major dams and canals, made groundwater irrigation a convenient choice for farmers. Groundwater recharge is one of the most important limiting factors for groundwater withdrawal and determines the groundwater development potential of an area. Even though recharge plays a key role in controlling groundwater system dynamics, substantial uncertainty remains regarding the relationships between groundwater recharge and its governing factors at a large scale.

In a study recently published in Hydrology and Earth System Science, we investigated the most influential factors on groundwater recharge at global scale. Particularly, we quantified the global effects of meteorological, topographical, soil and vegetation factors on groundwater recharge. One of the major limitation of large scale recharge modelling studies is the unavailability of global gridded recharge datasets. Therefore, we collected recharge estimates reported in literature from 715 globally distributed sites.  This information was used to build an empirical groundwater recharge model. The developed model was capable of modelling groundwater recharge across the globe at a spatial resolution of 0.5° x 0.5° on an annual scale (see figure). In contrast to conventional water balance recharge estimation, a multimodel analysis technique was used to build the model.

The study identified precipitation, potential evapotranspiration and land use as the major factors controlling groundwater recharge. The long term global average annual recharge from 1981 to 2014 was estimated to be 134 mm/y with a prediction error ranging from -8 mm/y to 10 mm/y for 97.2% of cases. The high dependency of recharge on meteorological predictors make it more vulnerable to climate change. The recharge estimates from this model were very consistent with the estimations of the national statistics from Food and Agriculture Organisation (FAO) as well as with the estimates from other global hydrological models. Due to the simplicity and computational efficiency, this model has a great potential in aiding the policy makers and researchers to make informed decisions in larger scale groundwater management.