Estimating where our river water goes

For example, of the inflows to rivers in the South East Queensland region, two per cent is lost to the atmosphere and landscape due to overbank flows (when rivers burst their banks and spread out onto floodplains). Fourteen per cent seeps to groundwater through the river beds, and about 72 per cent of the inflows make it to the tidal limit of the rivers as freshwater outflows to the sea. 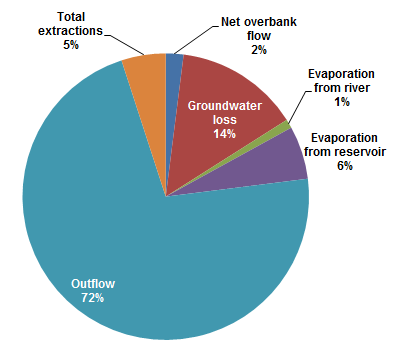 Breakdown of the total runoff into rivers in the South East Queensland region
Knowing where river water goes is useful not only for our understanding of river systems, but also for making accounts for river water at basin, State and national scale. It’s also useful for local surface and groundwater managers to manage their resources. For example, knowledge of the seepage to groundwater could be used to better decide how much water to release from a dam.
The model has helped to significantly reduce the unestimated water amounts reported by the National Water Account. In the Murray–Darling Basin account, the unestimated river water amounts reduced from 12 000 GL to less than 1000 GL in 2016. 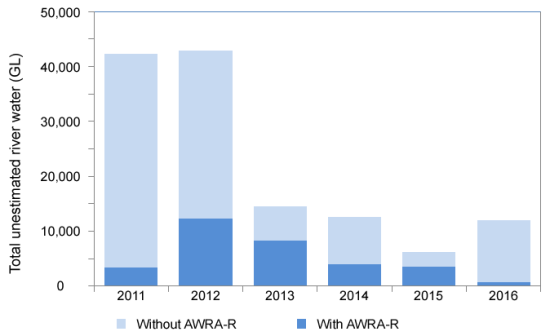 Comparison of unestimated river water for the Murray–Darling Basin region (with and without AWRA-R model estimates)
To-date, the model has been applied to 40 large river basins, within nine of the ten National Water Account regions. Together they cover most of the major developed and populated Australian river regions.
Request the estimated river water balance components from 1970 onwards at reach to river and regional scales by emailing awrams@bom.gov.au. Please also contact us to apply the model in your region. 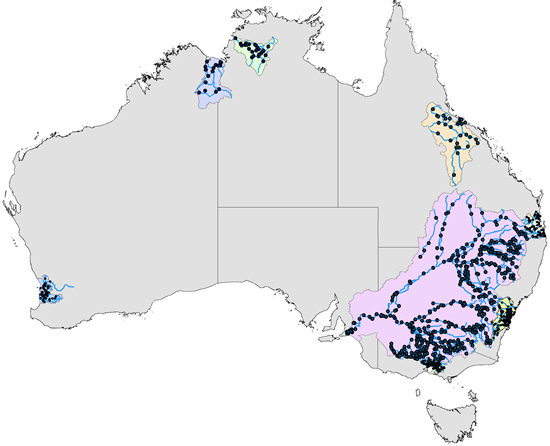 Find out more about the AWRA-R model