How suitable is quantile mapping for post-processing GCM precipitation forecasts? 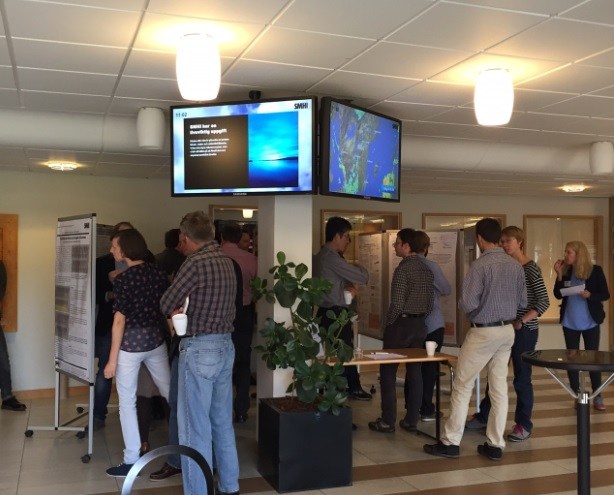 Poster session during the HEPEX Workshop at SMHI in Norrköping, Sweden.

Back in September 2015 at the highly successful HEPEX Seasonal Hydrological Forecasting Workshop at SMHI in Norrkoping, Sweden, I heard a number of presentations and saw posters on the use of quantile mapping for post-processing or downscaling GCM precipitation forecasts.

While quantile mapping was well known to be highly effective in bias correction, I was concerned that some of its limitations might not have been apparent to some people.

After discussing with Andy Wood and Maria-Helena Ramos at the workshop, I left the workshop with the idea of doing a piece of work to demonstrate both the effectiveness and limitations of the quantile mapping method.

Back in Melbourne, my colleagues at CSIRO, led by Tony Zhao and James Bennett, enthusiastically took on the research task. With inputs also from Andy and Helena, we recently published the results in Journal of Climate. The paper is simply titled: How suitable is quantile mapping for post-processing GCM precipitation forecasts? Read the abstract

When past forecasts are not correlated with observations in any way for a particular situation, we should not be insisting on using the erroneous forecasts, and should instead revert to climatology forecasts. Take this point further with another limiting case. Past forecasts are found to be negatively correlated with observations for a particular situation. Applying quantile mapping cannot reverse or remove the negative correlation, as the order of values after quantile mapping does not change.

The good news is that there are alternatives to the quantile mapping method. In the paper, we demonstrated that the Bayesian joint probability method was effective in achieving bias correction, making forecast ensemble spread reliable, and steering the forecasts to climatology when the raw forecasts had no underlying skill.

If you are interested in the topic, take a look at the paper here. The authors would love to hear your thoughts.

Finally, may I use this opportunity to let you know that I recently made a career change by joining the University of Melbourne as a professor of hydrological forecasting. Leaving the fantastic water forecasting team in CSIRO that I built and loved was one of the most difficult decisions I had to make. I look forward to continuing to work with my colleagues at CSIRO and indeed the HEPEX community to advance research and practice of ensemble hydrological forecasting. My new email contact is quan.wang@unimelb.edu.au.

* with inputs from Tony Zhao, James Bennett, Andrew Schepen, Andy Wood, David Robertson, and Maria-Helena Ramos, after several discussions in the past months.