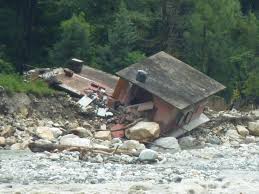 As the climate changes, increases in temperature are expected to bring more intense rainfall events increasing the risk posed from flooding. Two recent studies published in Nature publishing group journals have specifically looked at Australian rainfall to investigate just what warmer temperatures may mean for future flood events. The studies have shown that the intensity of short-duration rainfall bursts has been increasing and postulate that these changes may be due to intensification of storm cells which combined result in more destructive short-duration flood events.

Founded in physics, observed in history

The anticipated changes to rainfall in a warmer climate are founded in thermodynamics, where, by the Clausius-Clapeyron relationship, for every degree increase in temperature the maximum amount of moisture in the atmosphere can be 7% greater. The assumption that the intensity of the most extreme rainfall events will scale in proportion to the capacity of the atmosphere to hold moisture is often used as a starting point for understanding how extreme rainfall patterns will respond as a result of anthropogenic climate change.

At the global scale, this has been found to be approximately true, both in historical datasets and future model predictions. However, at local and regional scales departures from this trend are common. Some places experience increases in extreme rainfall intensity greater than 7% while others see decreases in rainfall intensities. These discrepancies suggest that other factors may be at play when it comes to trying to predict what a warmer climate may bring.

Convective events are those largely driven by the instability of moist parcels of air due to local temperature gradients which lead to localised, high intensity, rainfall bursts and are much more common in the Sydney summer. In contrast, stratiform rainfall, which is linked to large-scale circulation patterns such as east coast lows, is more prevalent in winter. Research published by Dr Zheng, Dr Leonard and Dr Westra at the University of Adelaide in the journal Nature Climate Change looked at the trend in seasonal rainfall in the last four decades in the greater Sydney region. For short durations, it found that annual maximum precipitation was increasing at a rate of 6.5-8.0% per decade and this was the result of increases in summer dominant rainfall, whereas the intensity of winter dominant rainfall was actually found to be decreasing. If the historical trends were to continue into the future, this would imply that a future climate may see an increase in the frequency of high-intensity, short duration warm-season rainfall events and a reduction in the frequency of long duration cold-season rainfall events such as those occurring from east coast lows.

In addition to the changing mix of rainfall type, the rainfall pattern within these storm bursts is also likely to change. Research published by Mr Wasko and Prof Sharma at the University of New South Wales in the journal Nature Geoscience looked at the historical relationship between temperature and rainfall at 79 locations around Australia. The research showed if storm bursts were split into their individual components – termed the temporal pattern – the largest rainfall fraction increased at higher temperatures and the smallest fraction decreased. In other words, higher temperatures were linked to less uniform and more erratic storm patterns, and these changes in the rainfall pattern dominated over any changes in the overall storm intensity with temperature. This increase in non-uniformity is particularly of concern in smaller urban catchments where the timing of the rainfall arrival is just as, if not more, important than the overall storm intensity.

Assessing the impact of climate change on future flood risk is a complicated task, it not only depends on the anticipated changes in rainfall and climate but also depends on the interactions between the rainfall and the ground upon which the rainfall lands. The type of rainfall, its timing, the catchment size, its slope, the ground type and whether it has been dry or wet recently all have significant impacts on the resulting flood flow.

Engineers Australia is in the process of rewriting the Australian Rainfall and Runoff guidelines which influences how we design for flood risk, and work is being undertaken to better account for climate change. This recent research suggests that changes in future rainfall extremes may be more complicated than simply a uniform change in the rainfall amount or its frequency. If we are to adequately characterise changes in future flooding, a broader approach needs to be taken to fully understand the possible changes that come with warming temperatures.