Is the tropical Indian Ocean to blame for southern Australia’s wet winter? 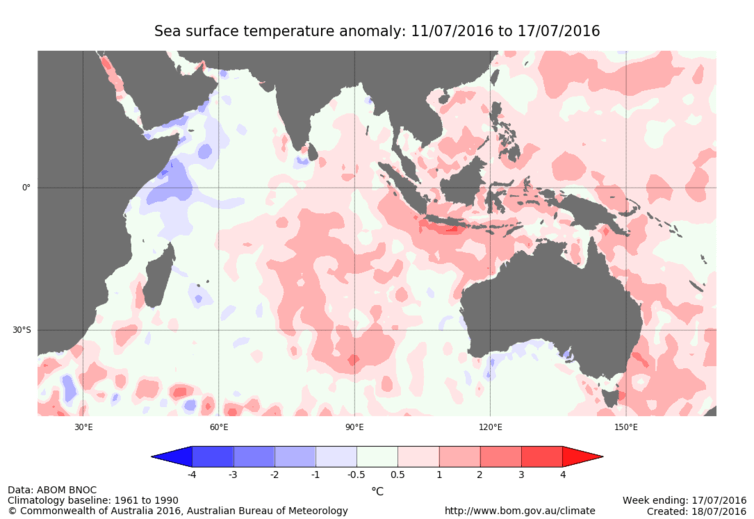 If you live in southern Australia, you may have noticed it’s been a rather wet couple of months. What you might not realise is the role that the tropical Indian Ocean has played in helping to create this weather.

Since late May, the ocean has been in what we call a “negative Indian Ocean Dipole (IOD) phase” – and it seems set to be one of the strongest such events in at least 15 years.

Compared to its Pacific cousins, El Niño and La Niña, the IOD is something of a mystery to many people. So what is it, and what does it mean for our climate, and does it explain why this winter has been such a wet one for many Australians?

What is the Indian Ocean Dipole?

The Indian Ocean Dipole is similar to the more famous El Niño–Southern Oscillation (ENSO) in the Pacific. That system seesaws between El Niño conditions – characterised by a “warm blob” of surface waters in the eastern tropical Pacific – and La Niña, where the warm patch is in the western Pacific.

Similarly, the IOD is defined by the relative distribution of warmer-than-usual water across the tropical Indian Ocean. The system can flip between positive, neutral and negative phases, depending on the presence and position of these “temperature anomalies”.

When the temperatures in the west (off Africa) and the east (off Indonesia and Australia) are roughly normal, we call this a neutral IOD phase.

The IOD enters a negative phase (as it did two months ago) when waters in the eastern Indian Ocean become significantly warmer than normal, while waters off Africa are cooler. This happens largely because of prevailing wind patterns.

The Earth’s rotation causes trade winds to blow from east to west, which push warmer surface waters across the Pacific and into the relatively shallow waters north of Australia. This warm water (often the warmest open ocean water in the world) causes a drop in atmospheric pressure over the western Pacific and eastern Indian oceans. In turn, this low pressure induces prevailing winds to blow across the tropical Indian Ocean from west to east.

When these westerly winds strengthen, they push surface waters (which are warmer than deeper water) towards Australia, while at the same time cooler waters are drawn up to the surface off Africa.

The resulting pattern – a blob of warmer-than-normal water in the east and a cooler-than-normal patch in the west – is termed a negative IOD phase. As you can see from the map below for the week ending July 17, we’re in a negative phase now – cooler waters can be seen near the Horn of Africa, and warmer waters near Sumatra.

These conditions increase tropical moisture and cloudiness near Australia. This typically leads to increased rainfall across the southern half of the continent (see below). Conversely, eastern Africa gets less rainfall than normal, which can lead to intense droughts and, at times, quite serious humanitarian impacts.

A negative IOD affects Australia’s temperatures as well as its rainfall. Across the southern mainland, cooler-than-average days are more likely from June to November, although overnight temperatures are generally normal. The snow season typically finishes later and with deeper peak snow, although these impacts are being modulated by climate change.

Meanwhile, Australia’s tropical north tends to get warmer-than-usual days and warmer nights too.

When will it end?

IOD events typically develop during late autumn or early winter, and peak in spring. They then decay rapidly as the monsoon trough arrives in the Southern Hemisphere around the end of spring, bringing a change in wind patterns that rapidly breaks down the IOD pattern. This means that the IOD typically has little influence during the Australian summer.

Are El Niño, La Niña and the IOD linked?

Indeed, we experienced a combined positive IOD/El Niño event in 2015, which goes a long way to explaining the particularly poor rainfall in many parts of Australia last spring. Typically when the two events occur together, their effects on rainfall are reinforced.

The current state of play

The IOD has been in a negative phase for the past two months, and is likely to stay like that until the end of spring. Recent observations suggest it’s the strongest negative event in at least the past 15 years. What’s more, as of mid-July 2016, about half of international models suggest that La Niña may form later in the year. So why should we care? The negative phase of the IOD has already influenced recent rainfall – last month was Australia’s second-wettest June in 117 years of national records. This is good news for some of the areas in Victoria, Tasmania and South Australia which were hit hard by the dry conditions associated with the 2015-16 El Niño.

It’s also likely that the negative IOD has contributed to the very warm conditions across northern Australia, which has seen several records set and even had an impact upon tropical crops such as mangoes, which require cool periods to set flower. And if La Niña does become established in the Pacific Ocean, we may have only seen the start of the wet weather.

Australia’s current climate outlook reflects the typical conditions expected during a negative IOD event. However, other factors are at play too, including the overall warming trend of Australia’s climate, the record warm Indian Ocean more generally, the tendency for our weather systems to be located more to the south, and even the occurrence of East Coast Lows which may be more likely this year due to a record warm Tasman Sea.

To stay up-to-date with the latest on the Indian Ocean Dipole, and the El Niño-Southern Oscillation (ENSO), please read our fortnightly ENSO Wrap-Up. We’ve also recently updated all of our Indian Ocean Dipole information, including a new list of historical IOD years, video and infographic.