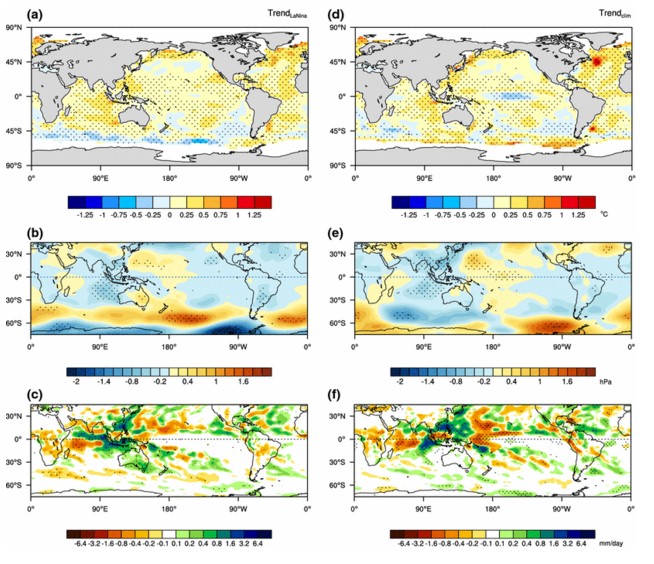 A recent study by Dr Eun-Pa Lim and colleagues demonstrated a connection between long-term trends in sea surface temperatures and amplified wet conditions in subtropical Australia during La Niña.

Variations of Australian seasonal climate depend heavily upon the occurrence of El Niño and La Niña in the tropical Pacific and associated temperature variations in the Indian Ocean.  The Australian climate during 2015 was not an exception: A strong El Niño developed mid-year together with a positive phase of the Indian Ocean Dipole, and many parts of the country experienced anomalously warm and dry conditions during spring. Tropical ocean-atmosphere dynamics works in a way that La Niña often follows large El Niño events. Hence, there is a strong expectation of a swing to La Niña conditions later in 2016, which should bring wet and cool conditions over many parts of the country.

The typical relationship of La Niña and the Australian climate is well understood, whereby La Niña brings increased chances of wet conditions from late winter through to summer and the magnitude of the increased rainfall is proportional to the strength of the La Niña event as measured by ocean surface temperatures in the equatorial Pacific. On the other hand, it is less known how La Niña interplays with the long-term trends in SST and what the impact of this interplay can be on the Australian climate. For instance, there has been a significant warming in the Indian, western Pacific and North Atlantic Oceans over the past century. What could be the role of this underlying warming for Australian rainfall during La Niña occurring in the next few years?

The recent paper, published in Climate Dynamics, provides some insight into this question by focussing on the strong La Niña of 2010 and its impact on Australian springtime rainfall.  The authors conducted dynamical model experiments using the Bureau of Meteorology’s dynamical seasonal climate forecast system, POAMA, to investigate the sensitivity of forecasts for Australian spring rainfall of 2010 to the presence and absence of the 50 year long-term SST trend.

The results revealed that the positive trend of the SST over the Indian-western Pacific Oceans amplified the positive SST anomaly associated with La Niña in the tropical seas surrounding northern Australia, which led to a significant increase of tropical upper tropospheric warming and resultant steepening of meridional temperature gradient in the troposphere between the tropics and higher latitudes. This strengthened temperature gradient acted to shift poleward the high latitude jet stream (i.e. the positive phase of the Southern Annular Mode was promoted), which induced increased rainfall over subtropical Australia, and therefore amplified the wet conditions during La Niña.

The authors propose that trends in SST, either naturally occurring or in response to anthropogenic forcing, could play an important role in the amplification of extreme conditions caused by future El Niño and La Niña episodes.