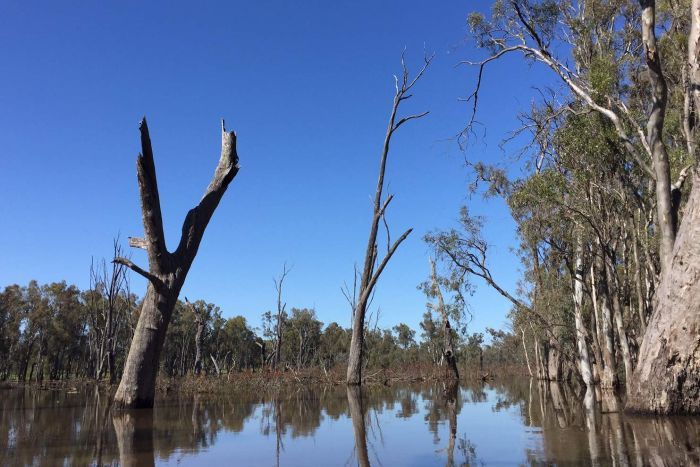 PHOTO: A few months ago, this wetland was dry. Now the only way to travel is by boat. (ABC Rural: Warwick Long)

Floodwaters can bring destruction to homes, crops and infrastructure but they can also bring life.

One northern Victorian farmer, could not be happier with what the water is bringing to his property.

Jamie McMaster moved to Yambuna near Echuca along the Lower Goulburn River last year and hoped that he would soon see the wetland on his property — dry for more than half a decade — once again teeming with life.

As floodwaters spread across the eastern seaboard this year, Mr McMaster got his wish.

“We’re very excited about it,” he said.

PHOTO: A dwelling on the edge of floodwaters at Yambuna. (ABC Rural: Warwick Long)

“Just to see the biodiversity — the wildlife come to life — was incredible.

“The birds came from nowhere, they just knew it was a happening place and wanted to be here.

“There is a lot more frog activity that’s for sure; the frogs started coming out of the soil before floodwaters, they just knew.”

The only way around over half of the McMaster’s property was now by boat or canoe.

Mr McMaster had always had an interest in protecting the native environment and was investigating the use of environmental water with Victorian authorities before the heavens opened.

It’s a relationship that he is still pursuing.

Simon Casanelia from the Goulburn Broken Catchment Management Authority has been keeping an eye on the floodwaters.

His team is monitoring the environmental response to the floodwater and will do so until December.

The floodwaters have taken the strain this season off using environmental water to top up wetlands and keep native species breeding; however, authorities are still keeping their options open.

“We are probably unlikely to deliver environmental water to them unless there was some sort of need,” Mr Casanelia said.

“If there was some sort of waterbird breeding event and the water started to recede too quickly then we might consider delivering some water to maintain water levels.

“Otherwise, I think we will let the natural processes take place.”