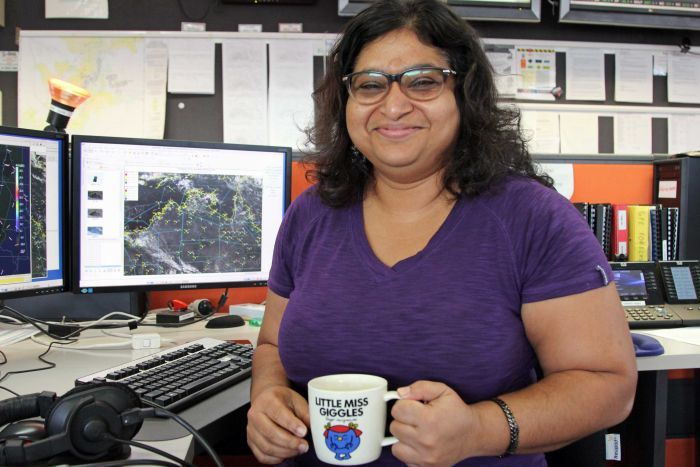 As a kid growing up in Fiji, a howling cyclone was a chance to stay up late, swap ghost stories and eat specially-made Indian stuffed bread for Darwin meteorologist Angeline Prasad.

“You obviously couldn’t sleep, there was wind raging outside, there was destruction outside and we all used to climb in one bed and listen to stories,” Ms Prasad said of the storms that whipped around Fiji’s second largest city of Lautoka in her youth.

“All my cousins used to come and stay with us whenever there was a cyclone threat.

“There was 10 of us in one bed, and they used to tell us stories the whole night just to keep us entertained and just to keep our minds off what is actually happening outside.

“We’d listen to ghost stories and jokes, riddles, and mum and the aunties used to make all these delicious meals for us.

“[Cyclones] bring so much destruction and destroy people’s lives, but as a child for me it was an exciting time!”

These days Ms Prasad works as a senior forecaster in Darwin’s Bureau of Meteorology office.

PHOTO: The regional forecast is for an average to above-average number of tropical cyclones this season. (ABC News: Xavier La Canna)

On Wednesday she co-hosted an hour of radio on 105.7 ABC Darwin in the lead-up to cyclone season.

The bureau is forecasting an average to above-average season for Australia’s northern region this year, meaning three tropical storms or more.

Ms Prasad will be part of the team tracking their approach in the danger period from November through to April.

From Fiji to Darwin

Ms Prasad’s earliest meteorological memories come from standing outside her home on the side of a hill in Fiji, looking out over the ocean.

“I used to love seeing the storms roll off the hills in the afternoon and used to always wonder why do the storms only happen off the mountain ranges?” she said.

After studying maths and physics in Fiji and meteorology in New Zealand, Ms Prasad moved to Australia a few years ago.

She describes herself as a fourth generation Indian Fijian and said her great-grandparents moved to the island nation as indentured labour contracted to work on plantations for Australia’s Colonial Sugar Refinery company.

She is active in Darwin’s Fijian community and continues to help gather donations for those still struggling after February’s Cyclone Winston.

More than 40 people were killed in the storm — one of the most powerful to make landfall in the southern hemisphere.

“Villagers are still living in tents,” she said of the ongoing aftermath in parts of Fiji.

She said subsistence farmers were still working to replace crops and communities were bracing for the start of the next cyclone season.

“In most Pacific Island countries people don’t live in cyclone-proof housing, and the cyclone season is already upon us,” she said.