More tropical cyclones likely for Australia this year: here’s why 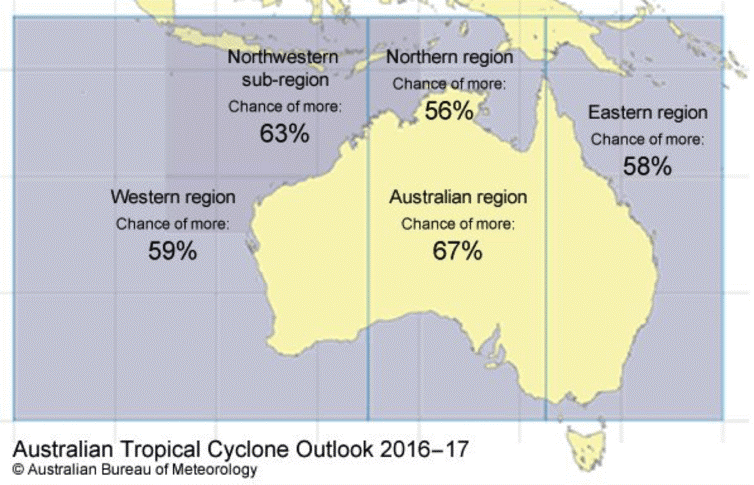 Northern Australia is likely to experience an average or above-average number of tropical cyclones this summer, according to the Bureau’s annual Tropical Cyclone Season Outlook, issued last week. Given current climate drivers, that means we’re likely to see 11 or more tropical cyclones in the Australian region, and typically around four of those will cross the coastline.

The season will almost certainly be more active than the last. And that means it’s time to prepare, because the likelihood of damage from a tropical cyclone is high in any season.

Last year was certainly nothing like a normal season, so you don’t want to be caught out. The Australian region saw only three tropical cyclones in total (easily beating the old record minimum of five set in the El Niño years of 1987 and 2006 from our data back to 1969-70), none reached severe status (Category 3 or above; this has never occurred) and only one crossed the coast (the equal lowest number on record).

But why do we expect such a different season this time around?

When a cyclone develops, the Bureau issues short-term weather forecasts on the cyclone’s likely track and strength. But for the tropical cyclone season as a whole, we can only look at the chances of more or less cyclones than average forming in Australian waters because cyclones and their tracks are so sensitive to subtle and fine-scale changes in the atmosphere and ocean.

When considering how many tropical cyclones may form over a season, we currently use a statistical model that considers the long-term relationship between cyclones and the state of El Niño or La Niña (properly known as El Niño–Southern Oscillation or ENSO). This particularly focuses on ocean temperatures and atmospheric circulation over the tropical Pacific Ocean.

What makes a cyclone?

Tropical cyclones form in regions with very warm surface waters — generally greater than 26℃. The location of this warm water in the tropical Pacific Ocean and around Australia’s northern coast is affected by ENSO.

The image above shows that during El Niño years, cyclones are more likely to occur away from Australia, closer to the dateline and in the eastern south Pacific, as well as in the western Indian Ocean.

This is why 2015 – which was also one of the strongest El Niño events on record, arguably behind only 1982–83 and 1997–98 – resulted in such a quiet tropical cyclone season for Australia. It is also why the eastern Pacific at the same time experienced its second most active (eastern) Pacific Hurricane season on record.

Conversely, during La Niña years, cyclones are more likely to form in the western Pacific/Coral Sea, and in the eastern Indian Ocean. As La Niña also tends to bring warmer-than-average waters around Australia’s coastline, the Australian region experiences more cyclones overall. Of course ocean temperatures are just one factor that drives the formation of cyclones. Changes in the atmosphere also encourage tropical cyclones, including higher humidity and more favourable winds.

Because tropical cyclones form closer to the coast during La Niña years, and there tends to be more winds guiding them towards land in some areas, there is a greater chance of more cyclones making landfall. The first crossing also typically comes earlier. History shows that, on average, the first tropical cyclone to make landfall during a La Niña year is around December 10, more than two weeks earlier than the average date across all cyclone seasons; December 25. Typically, Australia’s western coastline sees the first crossing of the year.

As this season starts, ENSO is neutral. But a La Niña “watch” is current, meaning a La Niña certainly cannot be ruled out before the end of the year.