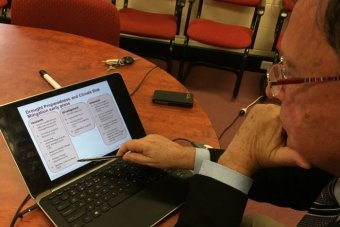 This week’s Queensland budget allocated $3.5 million to the Drought Resilience Program, which will be used to establish the Queensland Drought Mitigation Centre in partnership with the University of Southern Queensland (USQ).

Professor Roger Stone, director of the International Centre for Applied Climate Sciences at USQ, said the new centre was a fantastic step forward for agriculture in a state that had the most variable climate in the world.

“So parts of Queensland have to put up with the highest rainfall variability anywhere on Earth,” Professor Stone said.

Climate research with international agencies on the cards

The Queensland Drought Mitigation Centre will conduct monitoring and engage in climate research — often in cooperation with international agencies — to find out more about what drives drought.

“We know, for example, El Nino is one of the main sources for drought, but that’s only really for half of Queensland or two-thirds perhaps,” Professor Stone said.

“When we get out to western Queensland, there are other factors that take over, which we know about, but it’s about tying all this together.

“So it’s putting all that together to help us prepare better for the droughts when they start to develop, but also getting us ready for when they break so we can capitalise on the better seasons when they occur.”

Professor Stone said the new centre could also have implications for crop insurance.

“One of the projects as part of this centre is to have a better look at the crop insurance programs,” he said.

“So, linking in with the insurance and the re-insurance agencies, not only in Australia but globally, on transferring this risk about, so that insurance companies better understand the sort of variability that Australia has to put up with and the climate mechanisms that cause our droughts.”

“Eighty-three per cent of Queensland is currently drought-declared,” he said.

“Some of the droughts in the past have taken 1 per cent off Australia’s GDP growth, so [they] can cause massive economic loss to the country.”