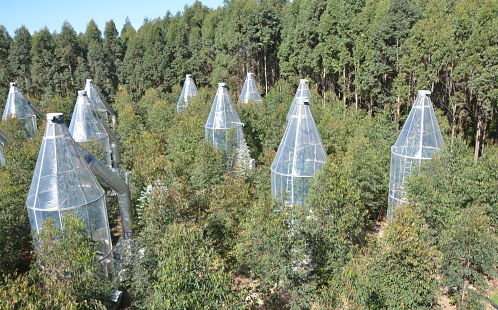 We know that the heat is uncomfortable for humans and animals, but how does our native flora fare? New Western Sydney University research has offered a glimpse of whether our trees will cope with ever-rising average temperatures and extreme, prolonged heatwaves.

The researchers, based within the Hawkesbury Institute for the Environment, used the unique Whole Tree Chambers located at the University’s Hawkesbury campus to impose a year of warming and then a four-day, high-intensity heatwave on trees local to the Sydney region.

The Whole Tree Chambers are unique in their ability to grow nearly full-height trees in a fully controlled environment and to be able to precisely and accurately measure the trees’ rates of photosynthesis and water use.

Within the chambers, researchers imposed an additional 3 degrees Celsius on Parramatta Gums (Eucalyptus parramattensis) to simulate the impacts of higher average temperatures in the Sydney region. After 12 months – in which time the trees grew to more than 6 metres – researchers then imposed four days of heat at 43 degrees Celsius.

The results revealed that these native trees showed a remarkable capacity to cope with the heatwave, using a range of different strategies to avoid being damaged by the heat:

Professor Mark Tjoelker explains that the importance of this research lies in precisely measuring the performance of a eucalypt species that is being pushed to its temperature limits over a period of days.

“What normally happens is that a tree’s use of water and its rate of photosynthesis are closely related and this process is the basis of how scientists predict what the effects of a warmer Australia on trees and forests will be,” says Professor Tjoelker.

“Under these extreme temperatures, this relationship changes completely – the trees can no longer photosynthesise, but they continue to use a lot of water to keep their leaves from reaching damagingly high temperatures. In addition, the ability to increase the high-temperature tolerance of their leaves helps to explain how eucalypts cope with heatwaves that would burn the leaves of other species.”

Dr. John Drake, formerly of the Hawkesbury Institute for the Environment and now a researcher at the College of Environmental Science and Forestry in the United States, explains that there is a limit to all plants’ ability to adjust to heat even if some species adapt better than others.

“We were surprised how well these eucalypts acclimated to the heatwaves and maintained their function,” says Dr. Drake.

“This indicates that eucalypts can tolerate elevated temperatures and significant heatwave events as long as they have access to water. If heat and drought combine, then we may see more damage occurring and the potential for tree mortality,” he says.

Provided by: University of Western Sydney