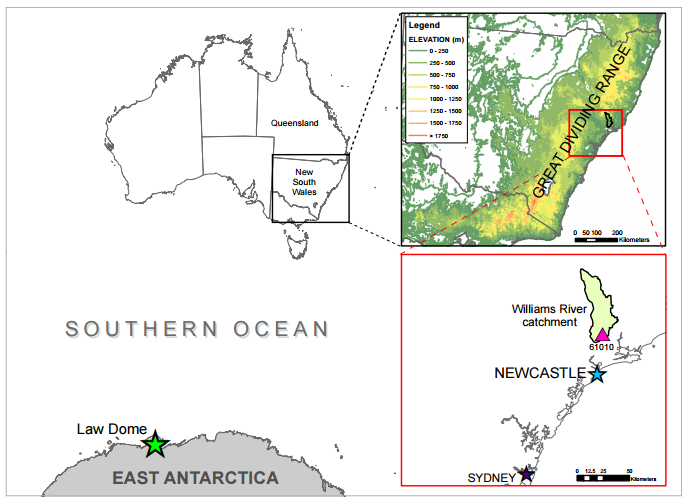 Water and catchment management strategies in eastern Australia have traditionally been designed based on the patterns and statistics of the last 50-100 years when direct rainfall measurements exist. Recent research led by Dr Carly Tozer of the Antarctic Climate and Ecosystems CRC has found that the instrumental climate record, which commences around 1900, does not show the full range of rainfall variability that is possible in the Newcastle region.

The study, published in Hydrology and Earth System Sciences, uses past climate information from Antarctic ice cores to reconstruct rainfall over the last 1000 years in the Williams River catchment in eastern NSW.

According to the researchers, “the Williams River catchment is an economically important catchment which provides water not only for agriculture and industrial activity but is part of the greater urban water supply for the Newcastle region.”

Information contained in the ice cores showed that, although the last 100 years has been drier than average, it is not unprecedented in the context of the last 1000 years, with a particularly dry period evident in the 1100-1200s. In addition, the 1000 year record shows evidence of longer wetter periods than have been observed in the recent period. These findings will allow better characterisation of flood and drought risk in the catchment and have serious implications for water/catchment management strategies and infrastructure planning.

“Persistent wet periods can lead to increased risk of flooding. The implication of this research is we do not have a full understanding of the range of extreme events (floods and droughts) for the Newcastle region” said the researchers.

The rainfall reconstruction is based on a 1000 year sea salt record extracted from an ice core from Law Dome, East Antarctica (Vance et al., 2013; 2015). Ice core sea salt levels reflect winds over the Southern Ocean, which are connected with large-scale weather patterns that influence Australia. This new study took the established large-scale correlation observed by Vance et al. and optimised the seasonal timing and calibration for the Williams River catchment.

Findings of the study show a significant correlation between summer sea salts and annual rainfall in the catchment over the instrumental climate record, with high sea salt levels linked to high rainfall periods and vice versa. This relationship was then extrapolated to develop the 1000 year rainfall reconstruction.

An important contribution of this study is that it is the first time the link between Antarctic ice cores and Australian rainfall has been exploited to provide catchment specific climate information for use by water resource managers.

“Given the link between the Law Dome sea salt record and a broad region of eastern Australian rainfall, the methods used here can be applied to other catchments in Australia” said the researchers.

Catchment-scale rainfall reconstructions can be utilised to produce streamflow reconstruction which can then be incorporated into water resources modelling and management. This can ultimately increase water security and improve the environmental health and sustainability of critical water supply catchments.