No it’s not your imagination, it actually is colder on the weekend (if you live in a city) 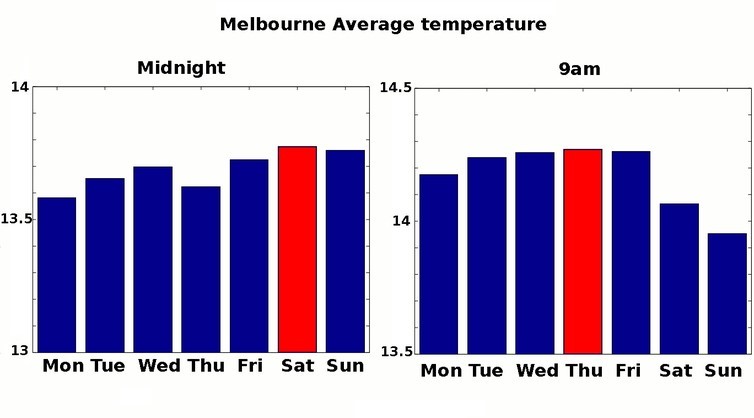 Do you ever feel that the weather is worse on the weekend? Well you might be right!

Our research, published in Environmental Research Letters, shows that in Australia’s biggest cites, the temperature is on average up to 0.3℃ cooler on Sundays compared to Thursdays and Fridays.

Not only are humans affecting the temperature on a global scale, we’re also doing it in our own backyards.

There is nothing in nature that occurs on a weekly cycle. Therefore any weekly pattern seen in weather (such as temperature and rainfall) must result from human activity, such as generating electricity, powering motor vehicles and using air-conditioners.

Most of these activities deposit waste heat and pollution into the atmosphere, and weekly cycles in temperature provide valuable insights into the consequences of such activities on the urban environment.

Our study shows that weekly cycles in daytime temperature occur in almost all Australian major cities. Sundays are often the coolest and Thursday or Friday the hottest due to human activity. This differs according to the time of day, with early mornings showing a much stronger signal than the afternoon.

Early mornings are often associated with cooler air temperatures, which can trap any waste heat near the surface. By contrast, in the afternoon the temperature has warmed and the local surface heat can be carried away to higher levels. So we see less of a strong relationship between human activity and temperature.

Hence the 9am temperature is higher during the week (coinciding with the morning rush hour) and much cooler on the weekend (when the traffic volume is quieter).

Melbourne and other major Australian cities are cooler at the weekend during the day, because they’re less busy. But what about night life?

In western cultures, with Saturdays and Sundays being days off work for a large proportion of the population, Friday and Saturday evenings have become popular with people going to restaurants, pubs, and theatres. This means there is more traffic and human activities in the city centres on these evenings through to the early hours of the following day.

Melbourne’s midnight temperature is warmest on Saturday (Friday night) and Sunday (Saturday night), which is the opposite to what we see for 9am.

Cities are also generally warmer than their surroundings, a phenomena known as the “urban heat island” effect. Don’t rush off to the beach though – it’s only hotter in the city. We can see this in weekly temperatures by comparing city centres to surrounding suburbs.

When we compare Melbourne city temperature to the airport temperatures at Tullamarine, Laverton and Moorabbin, the city is a lot warmer than the airports, especially at night time. This difference is largest on Saturdays and Sundays, showing that Melbourne’s active night-life is increasing the urban heat island effect.

The difference is less in the morning, especially on Saturdays and Sundays. There is even a small urban cool island on Sunday mornings compared to some suburbs.

Temperatures are closely linked to traffic volumes within cities. These can be used as a good indicator of the overall level of human activity.

Consistent with traffic volumes (at a typical busy inner-city intersection), temperatures on Sunday mornings are much less than weekday mornings. It’s this difference in morning traffic that allows us to measure the difference of the city without cars (Sunday) and with cars (Monday to Friday) at the same time of day.

Figures show that traffic congestion costs about A$4.6 billion in Melbourne each year. Reducing this is high on the agenda for Infrastructure Victoria and the state government, putting forward numerous traffic reducing strategies including peak-time penalties for motorists and a London-style congestion charge for central Melbourne.

Beyond Victoria, the Australian government is concerned with the need to create cooler, greener and more liveable cities in the face of climate change.

Reducing traffic has obvious benefits for travel time and sanity, but our study shows that Melbourne is significantly cooler when traffic levels (and general human activity) are low, based on the weekly cycles of urban temperatures.