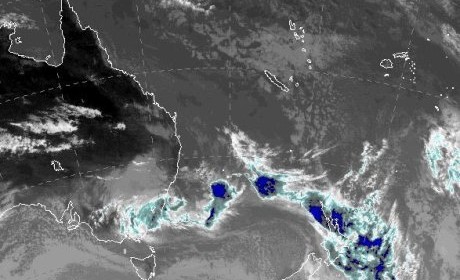 The wild weather system lashing the New South Wales coast and causing torrential rain and cyclonic winds has come at an unusual time of year, a meteorologist says.

Weatherzone meteorologist Rob Sharpe said the east coast low battering the south coast had developed within a low pressure trough yesterday, but that the severe events typically occurred earlier in the year.

“We do get quite a few [low pressure systems] affecting the coast, but it’s rare to get a powerful east coast low at this time of year,” he said.

“We typically get our most severe east coast lows in autumn or early winter.”

The storm is not the first severe east coast low to affect NSW this year – a similar system smashed the Central Hunter region in April.

Mr Sharpe said the current system was producing more widespread heavy rain, but had not produced as much strong wind as the April storm.

“In April, it was three days in a row we had damaging winds above 90 kilometres per hour,” he said.

“With this system, it’s only today that there is a risk.”

So far, 89kph winds have been recorded in Kiama, while 90kph gusts have belted Ulladulla.

“You can get some years where there are almost none, and then you can get events like in June 2007 when there were five east coast lows in a month,” she said.

“For big events, you tend to see them once a decade.”

Ms Pepler, a PhD student at the University of New South Wales’ Climate Change Research Centre, said the terms “cyclone” and “low” had similar meanings and could be used interchangeably and referred to low pressure systems with cyclonic winds.

However, she cautioned that “extra-tropical cyclones”, like the ones that frequented the NSW coast, were markedly different from their northern cousins – the tropical cyclones experienced in the country’s north in summer.

“People are more familiar with the term cyclone related to tropical cyclones,” she said.

“When we’re talking about east coast lows in comparison to, say, a thunderstorm, what we’re looking at is the actual synoptic way the event develops,” she said.

“A thunderstorm is very different and they are smaller in spatial scale … an east coast low can linger for a few days and give that persistent heavy rain.”

She said east coast lows could often have small thunderstorms embedded in them, producing hail or tornados as part of the broader weather system.

Ms Pepler said that while there was no obvious pattern to predict how many east coast lows would affect the state each year, research suggested their numbers may decrease in the future.

She said storms were a big area of interest for scientists examining links between weather patterns and climate change.

“The most consistent result we’re seeing is, if anything, a decrease of these winter east coast lows in the future,” she said.

“That doesn’t mean there will be a decrease in the most intense events.

“That could be a concern for water supply, it could be very important for filling up our dam levels.”

Ms Pepler, whose research focuses on the prevalence of east coast lows in NSW, said the storms that affected south-east Australia were similar to those that lashed North America and Britain.

“There are definitely a lot of parallels out there,” she said.

“We’re not special, we just get quite a lot of them.”
Original article appeared on ABC News, 25 August 2015 (link)