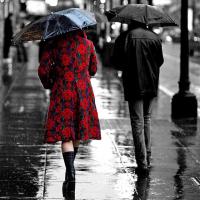 In the climate research community it is well accepted that global climate models do a relatively poor job at capturing daily precipitation characteristics, due to the small spatial scales involved.

What is far less known is that observations also suffer from large uncertainties when it comes to daily precipitation. This is why the evaluation of climate models using observationally constrained datasets continues to be a challenge.

Surprisingly, the magnitude of the spread in these datasets was similar to that found in unconstrained global climate models.

Figure: (a) Simple daily intensity index (SDII) for the period 1961–2005; (b) observations and reanalyses assessed in this paper. Light and dark grey shading represents the full and interquartile range of CMIP5 simulations (Table S1), respectively. (c) Region mask where satisfactory data coverage exists in all products (see text) and over which SDII is averaged. Picture (top left):Glorious Rain by Christopher Michel (CC2.0)

These shortcomings were partially alleviated by considering the different spatial scales represented in gridded datasets, particularly that of site-specific precipitation intensities versus intensities calculated from gridded precipitation.

It is apparent that some datasets are inherently better equipped for model evaluation than others. However, even considering this ‘scaling’ issue, the spread in precipitation intensity between different observationally constrained products is unsatisfyingly large and the reasons for it remain surprisingly elusive.