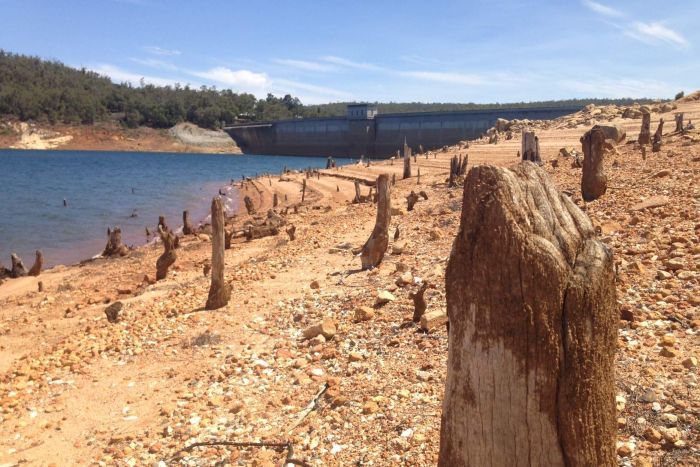 As Perth sweats through a severe heatwave, pressure is mounting on the city’s dwindling water supplies.

Dried tree stumps litter the baked earth at the edge of the Canning Dam, 33 kilometres out of Perth.

It was not long ago they were submerged by billions of litres of water but low rainfall and high temperatures in recent years have now made the dams virtually redundant.

Western Australia’s water utility said Perth had felt the effects of climate change more than anywhere else in the world, and it has had to bring forward its planning to ensure there is enough water to go around.

“Last year the run-off into our dams was the lowest since records began [in 1911], we got 11 billion litres in the dams and we lose about 14 billion litres a year in evaporation,” Water Corporation chief executive Sue Murphy said.

“So that means that our dams contributed nothing. In fact, took away from our water supply.

“We have a problem which is probably more extreme than other cities around the world. Every year we seem to have the worst case scenario worse.”

Coping with the heat:

It is a dire outlook, but the Water Corporation insists it is one that has been planned for.

More than 40 per cent of the water supply for Perth and surrounding areas already comes from desalination but it is a costly process.

In a state currently grappling with unprecedented levels of net debt, Water Minister Mia Davies said any expenditure would have to be carefully considered.

“Our groundwater and our dams are our cheapest sources, desalination is more expensive so if you’re talking about bringing a new desalination plant on, we do need to plan for that,” she said.

Desalinating sea water costs about $2.20 per 1,000 litres and the Water Corporation said if the city was to rely solely on desalination, water bills would essentially double.

“Water sources are expensive and we need to balance that very delicately and I think the community in Western Australia, there’s never been an expectation that we would be able to use water whenever and however we want, that’s been an ongoing conversation and the community understands that,” Minister Davies said.

The focus has now turned to recycling water, and a wastewater treatment plant is expected to open in Perth later this year.

In an Australian first, water from toilets, showers and laundries will be treated and injected into the city’s groundwater supplies but it will take about a decade for that water to be drawn out for household use.

It is estimated Perth’s water will eventually be split 50-50 between desalination and wastewater mixed with groundwater.

The Water Corporation’s Sue Murphy said lessons learnt in WA were being closely watched around the world.

“WA certainly has felt climate change more than anywhere else in the world,” she said.

“We’re seen as the canary in the coalmine for climate change by most of our water utility brethren around the world and I think it’s incumbent on us to work with the community in how to deal with it.” 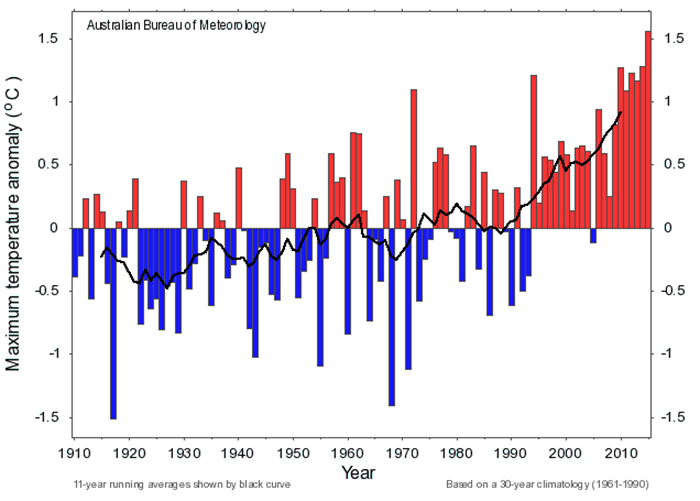 The weather bureau said the city’s climate had been drying faster than expected.

“I don’t think that we were able to say with any degree of certainty that there would be an acceleration of that drying trend as we’ve observed over the last five years,” the bureau’s spokesman Neil Bennett said.

Minister Davies is not worried. She believes Perth has been drought-proofed through good planning.

“I don’t know whether you’re familiar with California, they are making decisions under considerable pressure because that planning hadn’t been done so I’m confident that despite the enormous variability we’ve got the time to make those decisions,” she said.

The Water Corporation has flagged further water restrictions or higher prices in the meantime, but said that would depend on how consumers respond to the shortage.

“We live in the driest corner of the driest part of the whole world, we need to be respectful of that as a community and use water wisely,” Ms Murphy said.

“If people continue to use water at a very high rate, we’re going to have to make some hard decisions.”