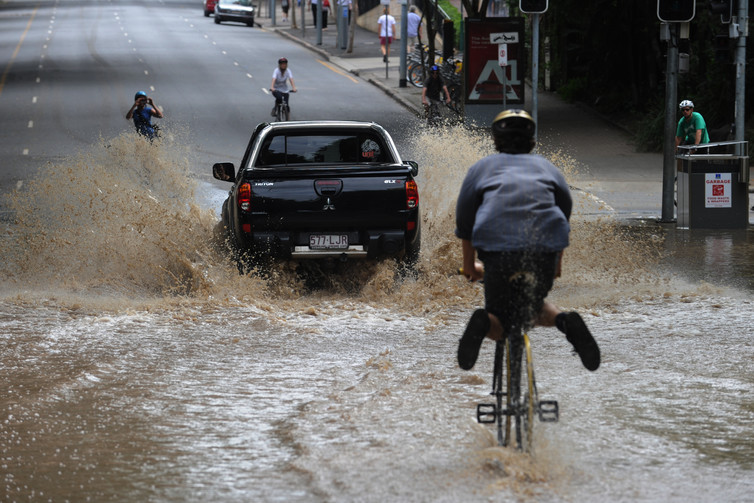 Recent floods in New South Wales, South Australia and Victoria have reminded us of the power of our weather and rivers to wreak havoc on homes, business and even, tragically, lives.

The journal Climatic Change has published a special edition of review papers discussing major natural hazards in Australia, developed by the OzEWEX working group ‘Trends & Extremes’. This article is the first in a series looking at those threats in detail.

As Dorothea Mackellar poetically pointed out, “droughts and flooding rains” have been a feature of Australia throughout history, so maybe we shouldn’t be all that surprised when they happen.

However, we also know that the reported costs of flooding in Australia have been increasing, most likely through a combination of increased reporting, increased exposure through land use change and population growth, and changes to flood magnitude and severity. So it is critical that we understand what might be causing these changes.

This was the question we asked in our review on how flood impacts have changed over time in Australia and how they may change in the future. We found that despite decades of research in these areas, there are still many gaps in what we know.

We know that floods depend not just on how much rain falls, but also on how wet the ground is before a heavy rainfall, and how full the rivers are. We also have evidence that the storms that generate heavy rainfall will become more intense in the future, because as the atmosphere warms it can hold more moisture.

This is particularly the case for storms that last just a few hours; in fact we think that these storms are the most likely to show the largest increases. In urban environments this translates to an even greater flood risk, because the concrete and hard surfaces allow this intense rain to run off quickly through storm drains and into creeks and rivers, rather than seeping into the landscape.

In larger catchments and rural areas the story is more complicated than in cities. If the soil is very wet as a result of rain over the previous weeks and months, then when a big storm hits there will be a lot of runoff. In contrast, if the soil is dry then flooding is less likely to be a problem.

Engineers currently use simple models to estimate this relationship between soil wetness and storm rainfall. But our research indicates that these simple models will need to be replaced with longer-term simulations that model all of the previous rainfall leading up to the storm.

Simple models use simple assumptions to translate rainfall risk into flood risk. But if these assumptions are incorrect, our estimates of flood risk (that is, the probability of a given flood magnitude occurring in any particular year) could be wrong. Flood risk is used to guide infrastructure assessment through cost-benefit ratios, so getting it right is important.

One of the reasons that catchment wetness varies is because of climate cycles like El Niño and La Niña. We have some idea how these and similar ocean cycles affect our climate, including the fact that they can cause fluctations in flood risk over decades-long timescales.

The difficulty here is that for most locations we only have 50 to 60 years of recorded river flow data. This makes it hard to separate out the influences of these climate cycles from other trends in flood data, such as the effect of increasing urbanisation.

There has been progressively less monitoring of streamflow in Australia over the past few decades, and this makes it even harder to understand regional changes in flood risk. Governments need to prioritise investment in data collection to allow us to improve our estimates of the risk of flooding and the associated damages now and in the future.

The recent work by the Bureau of Meteorology to develop a comprehensive set of high quality streamflow gauge data is a step in the right direction, but much more investment is needed in these areas.

Finally, we recommend that continued research into the fundamental changes likely from climate change is required. This requires climate models to be run at a range of resolutions to enable all the important climate processes for extreme rainfall to be properly represented.

Recent pressure on CSIRO’s climate modelling capabilities is concerning – the scientific questions are by no means fully answered on these topics. It is great to see the recent funding of the ARC Centre of Excellence on Climate Extremes. The work of these researchers, combined with ongoing efforts across Australia, will be important to provide better assessments on climate changes. This can help engineers and hydrologists continue to provide accurate flood risk estimates.