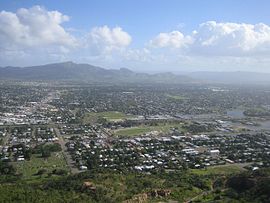 These changes are captured in a new Climate Analogues tool released by CSIRO today. It’s not just capital cities – you can find climate analogues for more than 400 towns around Australia, under various climate scenarios.

Eastern Australian coastal sites could see a climate shift to those currently typical of locations hundreds of kilometres north along the coast. Sydney’s climate could resemble that of Port Macquarie, and Coffs Harbour’s climate resembling that of the Gold Coast (by 2050; intermediate emissions).

Towns in major inland agricultural areas could have climates typical of inland areas further north, such as Griffith’s climate shifting to that of Cobar, a town around 300 km north (by 2050; intermediate emissions).

The change in climate is much greater by 2090 and under a high emissions scenario. In this case Melbourne’s climate could then be more like that of Dubbo, Griffith’s more like that of Bourke (600 km away), Sydney’s more like Brisbane, and Coffs Harbour’s could be like Mackay.

In January this year CSIRO and the Bureau of Meteorology released updated projections for Australia’s climate in the 21st century. All regions in Australia are expected to get warmer with, in general, inland regions warming at faster rates than the coast.

By 2030, Australian annual average temperature is projected to increase by 0.6-1.3C above the climate of 1986-2005 with little difference between emissions scenarios.

By 2050, the warming is around 0.7-2.1C for low emissions, 1.0-2.5C for intermediate emissions, and 1.5-3.0C for high emissions (the ranges expressed here indicate results from different model simulations).

Projections for rainfall vary across the Australian continent, where southern areas are expected to get drier, while for northern areas rainfall may increase, decrease or remain the same in future. The magnitude of rainfall change is larger later in the century and for high emissions.

One way of showing this change is by using climate “analogues”. These are places that currently experience the climate another place will see in the future.

Using analogues we can explore questions such as “What will the future climate of Melbourne be like in the year 2050 under a high emissions scenario?” or “What will Perth be like in a climate that’s 2C warmer and 10% drier?”.

These analogues are built on the most up-to-date set of climate projections for Australia, and use the approach we developed for a previous discussion about Australia’s future climate.

Alternatively we can specify an amount of temperature and rainfall change, regardless of year, emissions or climate model results, and let the website generate matching towns.

The website then finds a matching town based on average rainfall and average maximum temperature.

For example, in 2090, under high emissions and maximum model consensus, Melbourne’s future climate matches the current climate in Dubbo, Muswellbrook or Cowra in NSW, Warwick (Qld.), or Gawler (SA) for the climatic characteristics considered by the tool.

Some of Melbourne’s climate analogues for 2090 under a high emissions scenario. CSIRO

Watch out for the seasonal rains

This simple approach to analogues works well with current and future climates which are broadly similar in annual maximum temperature and rainfall distribution. However, it is less appropriate when rain at the different locations falls at different times of the year.

For example, by only considering annual rainfall totals, the Sydney climate could match that of current day Perth by 2090 under an intermediate emissions scenario and the hottest and driest case.

However, unlike Sydney, Perth gets most of its rainfall in winter, so it doesn’t make a good match for Sydney. By using the climate analogues’ “rainfall seasonality” adjustment we can set how much rain falls in the summer.

For instance, Bendigo is an analogue town for Hobart in 2090 under a high emissions scenario (4C warmer and 10% drier), but Hobart is on the water, while Bendigo is inland. A better analogue may therefore be Port Lincoln (SA).

Climate analogues can be useful for a number of purposes: agriculture, urban planning, or natural resource management. However there are some things that they can’t tell us: frost days, solar radiation, soils and other local climate influences. They can help us start to imagine what the future can look like, but we’d strongly caution against their direct use in decision-making where a more detailed assessment is advised.