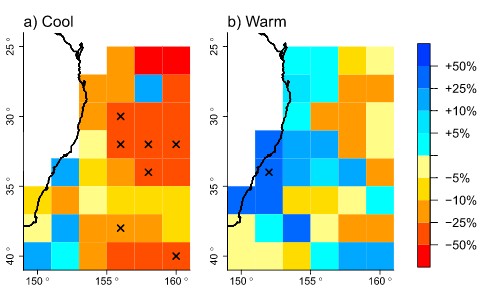 Recent work by Acacia Pepler and fellow researchers found that the frequency of East Coast Lows will likely decrease in the latter part of the 21st century.

East Coast Lows (ECLs) are a critical weather event for the Australian east coast, between Brisbane and eastern Victoria. They cause the majority of widespread coastal flooding events and are critically important to dam levels. Major ECLs are also responsible for severe weather impacts including high seas, strong winds and coastal erosion, as seen in June 2007 and April 2015.

“This is of potential concern for water resource managers, as ECLs are an important contributor to dam levels along the Australian east coast,” said the authors.

The researchers note, however, that a more detailed analysis of individual storms during the cool season suggests that the decline may be strongest for events further offshore, with weaker declines in those ECLs that are closest to the coast. In addition, major uncertainty remains in the future changes of ECLs during the warm season, where increases in ECL frequency near the coast are possible.

The research also shows no apparent decline at all in the number of the most extreme of these events, with an increase in the projected number of ECLs associated with very heavy rainfall likely in both seasons.

According to the authors of the study, “This may be of significant concern to emergency management and other groups due to the impact such events can have on lives and infrastructure, such as in April 2015.”