Rain records tumble in Queensland but drought not over 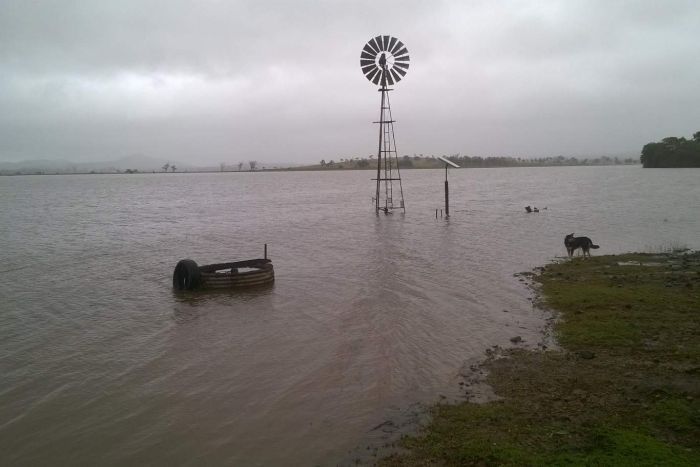 An unseasonably wet weekend in many parts of Queensland will go down in the record books, with some areas getting three to five times their average July rainfall in a single day.

Bureau of Meteorology forecaster Sam Campbell said a major upper level disturbance through the interior of the state caused the downpours.

“In some places we saw records broken by up to 100 millimetres,” he said.

“It’s an unusual [weather event] … what really focussed it and bought the heavy rainfalls to quite localised areas was a surface trough that developed along the Coral Sea and extending down the central coast.”

New records were set in the 24 hours up until 9am on Saturday, for highest July daily rainfall in Clermont, Emerald, Moranbah and St Lawrence.

Yeppoon also set a new record for highest recorded July rainfall with 252 millimetres falling in the 24 hours to 9am on Sunday, the previous July record was just 154 millimetres.

Queensland’s Minister for Agriculture, Leanne Donaldson said while the unseasonal rain had been great to see after years of drought, it would not change the drought status for local shires, with 83.9 per cent of the state still drought declared.

“Unfortunately it will not generate significant growth of the grass species that are the mainstay of the livestock industry,” she said.

“These grasses are mainly summer-growing.

“All in all this rain, combined with the good June rainfall already received, will not be enough to have any bearing on current drought declarations.

“I do not anticipate any change to the drought status of shires until local drought committees have assessed rainfall and pasture growth in April 2017.”

Despite not being drought breaking, the rain has been welcomed by graziers in drought-affected western Queensland.

Daisies and herbage greening up properties

Up to 65 millimetres has been recorded in parts of the central west, although the rain has still been patchy, with many properties receiving much less rain, especially in the south and far west of the state.

Producers have been surprised and thrilled by the winter rainfall even though it hasn’t been enough to break the drought.

Angus Emmott from Noonbah station, south of Longreach on the northern end of the Channel country has received 37 millimetres across the three days.

“The immediate thing it will mean, with the rain we’ve had before, we are getting a lot of daisies and herbage, so it’s actually greening up, and going to look beautiful,” he said.

“But as we come into warmer weather, we’ll get grass growth; certainly all the mulga and the gidgee are looking so much better from the rain of a month ago, so a bit more now, yes, and it’s just totally different.”

But by the same token, good rains are needed during the summer for prospects to really improve.

Peter Douglas from Juno Downs near Jundah in the central west, is pleased with the 15 millimetres he recorded.

But, said hopes for more later in the year which he said was critical for pasture growth.

“Until, the warm weather comes, we have just got to wait, that’s when we need the rains,” he said.

“As long as we have got enough to keep the soil moist until the weather warms up, we need some rain to germinate some Mitchell grass.

“It needs more rain in September, October, through to March.

Photo: The rain forced the postponement of the Paradise Lagoons campdraft (Supplied: Clay Cini Who Got the Rain Facebook page)

The Paradise Lagoons campdraft was scheduled for the coming weekend, but will now run between August 11-14, 2016.

Tom Acton said while they did not like delaying the draft, soaking rain was a good reason to do so.

“We’ve had a 150 millimetres here over the last three days, so it would have been chaos here. The trucks were due to start arriving this morning,” he said.

“It’s certainly set everybody up for a good spring, this rain.

“It’s certainly welcomed any time of the year but especially for those fellows out west.”

Not everyone has welcomed the wet weather with it coming at a bad time for fruit and cane farmers.

Reports of falls of between 100 and 300 millimetres from Sarina to Mackay, while Proserpine growers saw anything between 60 and 80 millimetres.

The latest rain has seen their crush stopped for the second time this year and Wilmar’s Proserpine and Plane Creek Mills won’t recommence crushing for two weeks, with Mackay Sugar’s three mills in similar predicament.

Many cane fields were still recovering from a wet weather event just a few weeks ago and the latest rain will see the regions crush pushed out from November to late December.

Sarina grower Ron Gurnett has a cane farm just near Sarina and over the cause of the weekend he saw 223 millimetres fall.

Some of his lodge cane was still recovering before the heavy falls hit and he said he would most likely have standover cane.

“I believe we are going to have standover cane for next year, I don’t believe we’ll get it all off, especially as they’re predicting rain again in August … that’s just going to slow things down and make things hard,” Mr Gurnett said.

Photo: Cane growers throughout the Mackay region have seen their cane fields soaked with rain for the second time this crushing season. (ABC Rural: Lara Webster)

Mackay and surrounding districts saw falls varying between 100 and 200 millimetres.

He anticipated it would be at least two weeks before growers could get back out into their cane fields.

“What is clear is that we have got a season now that is obviously going to move well into December. Any time you get in to late November, December that is a time of the year where you do not want to be,” Mr Schembri said.

“This just makes the harvest and crushing equation for the year a lot more difficult.”

Proserpine growers recorded falls between 60 and 80 millimetres and anticipated their crush would also blow out to a December finish.

Pineapple farmers on the Capricorn Coast bore the brunt of the rain in central Queensland.

Peter Sherriff said more than 450 millimetres on his property over the weekend and it had washed away small plants and topsoil.

“We came out of it better than I thought we would have but we still lost plants to the erosion,” he said.

“Like everything, you shouldn’t whinge about the rain, but as usual it comes in too much instead of the right amount. But hey, that’s just the way it goes.”