Research: evaporative power of water may create electricity on a large scale 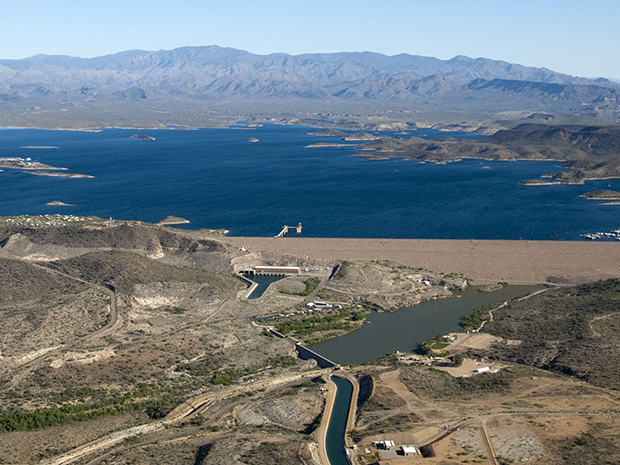 Researchers have hit upon an alternative to the well-known alternatives to fossil fuels: evaporation. A team of scientists from Columbia University in New York City has estimated that energy harnessed from water evaporating from U.S. reservoirs and lakes with a surface area of at least 0.1 square kilometer—not including coastlines or the Great Lakes—could yield up to 325 gigawatts of electric power at peak capacity, about 30 percent of the United States’ total installed generation capacity in 2015. Technology used to harvest the evaporative energy lowers the total rate at which water is lost to the air, and can be tuned to match demand, smoothing fluctuations in generation that are inherent to wind and solar power.

The research, published in today’s Nature Communications, builds on previous work from Ozgur Sahin, a biophysicist at Columbia who heads the team and was senior author on the paper. In 2015, Sahin and his colleagues unveiled an evaporation engine they created by depositing bacteria spores onto thin plastic films and layering the films into a palm-sized stack.

Because evaporation showed promise as a source of renewable energy, the researchers wanted to know the limits of its potential and whether they should continue developing the energy harvesters.

To do so, they designed a computer model to predict evaporation rates from lakes and reservoirs, and the power that could be generated from this part of the water cycle. Then they plugged in regional weather data including temperature, sunlight, wind speed, and relative humidity. Using the model, they adjusted weather variables to see which conditions were optimal for producing the most evaporative power, then compared the results to real weather data to confirm their hypothesis that regions with hot, dry, and sunny climates would have the greatest power potential.

They predict that in the Southwestern U.S., where potential for energy generation was strongest, evaporation could generate up to 10.49 watts per square meter. As a comparison, the authors noted that on average, wind generates 2.90 W/m2 and photovoltaic installations produce 8.06 W/m2. But the benefits weren’t restricted to the southwest. The power potential of evaporation exceeds demand in 15 of 47 states the researchers analyzed.

Harvesting that energy would require floating evaporation engines across the entire surface of a body of water. Although such devices are not yet commercially available, and covering a body of water may seem impractical on a large scale, setting such a system aloft would provide a hugely important side benefit: preventing drinking water reservoirs from shrinking.

Solutions for covering such bodies of water already exist. For instance, millions of floating “shade balls” lower evaporation rates at the Los Angeles Reservoir. Floating covers have been put over other reservoirs in California. Resource officials in the Colorado, where evaporation reduces water resources, have been investigating the use of thin films, reflective plastics, and lightweight shades to protect reservoirs.

“If you cover it with anything else, you’re not producing any energy,” says Ahmet-Hamdi Cavusoglu, the first author on the paper, who worked on the project as part of his PhD in chemical engineering. Cavusoglu is now the Associate Director at the Academic Venture Exchange and Director at the Innovation Accelerator Foundation in New York City.

Pumped hydroelectric storage could benefit even more from floating evaporation engines. At these energy facilities, water stored in a large pool uphill is allowed to flow down through turbines to produce electricity during periods of peak demand. When demand is low, electric power is diverted to the task of pumping the water back uphill to the pool. If such a body of water were blanketed in evaporation harvesters, they would not only reduce water loss, but generate power.

The researchers found that in addition to saving up to 96.4 billion cubic meters of water each year, evaporation engines could retain more fresh water than the amount consumed in seven states—Utah, Minnesota, Oklahoma, Maine, South Dakota, North Dakota and Vermont.

Cavusoglu said that evaporation engines won’t replace other forms of renewable energy, but could become part of an energy company’s portfolio, smoothing out intermittences caused by wind and solar power.