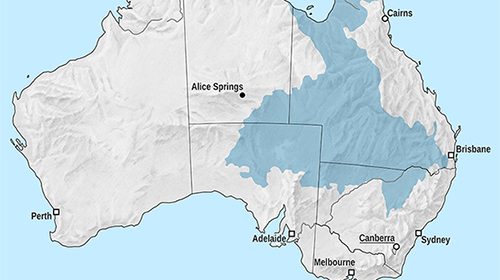 A new phase of future proofing will soon be rolled out across New South Wales as more artesian bores are capped to reduce the free flow of water from the Great Artesian Basin.

The Great Artesian Basin is one of the largest underground water reservoirs in the world.

It underlies approximately 22 per cent of Australia, occupying an area of over 1.7 million square kilometres beneath the arid and semi-arid parts of Queensland, New South Wales, South Australia and the Northern Territory.

And it has provided a stable and reliable source of water for farms and communities across those four states since it was discovered more than 100 years ago.

Vast tracts of semi-arid country in the Australian bush were opened up for grazing as bore holes were sunk to the Basin and flowing bores were installed, providing a stream of watercourses – bore drains that crisscrossed the landscape.

As understanding of the Great Artesian Basin improved, and knowledge grew of the depletion and recharge rates, it became obvious that the basin was not an infinite resource.

Beginning in 1999 and extending through several iterations, the Great Artesian Basin Sustainability Initiative (GABSI) has seen millions of dollars of federal and state funds spent to stem the constant flow of water.

Known colloquially as the “capping and piping” scheme, the GABSI has been popular among landholders and communities across the basin, providing more control over water supplies and helping to ensure the continue agricultural viability of thousands of acres of country.

Steve Cheal, the manager of water efficiency with the NSW Department of Primary Industries, said there was a large volume of work already accomplished under the scheme.

“Under this scheme we have capped about 350 bores and we have also put secure, good quality water supply across four million hectares, which is a huge area,” he said.

“It has provided security in times of drought to a lot of people.”

As Steve Cheal said, capping the bores and controlling the flow of water gives basin landholders control of water used not only by their livestock but also by native and feral animals. That is a useful tool in controlling the grazing pressure on the native pastures.

As well as controlling what goes on above ground, the GABSI has had a massive impact on the water pressure within the basin.

As outflow from the basin is slowed down to a rate more comparable to the replenishment rate, the basin in recharging.

And that increased pressure means that bores which had ceased flowing have now started to flow again, and now in their turn require capping.

“And what we have is a lot of bores which are up to 100 years old and as the pressure increases, what that exposes is their condition, which is not good,” Mr Cheal said.

“A lot of them are corroded and a lot of them were not built to the standards that they are now.

“What we need to do is to progressively work around all of the bores. That’s what is going to maintain the Great Artesian Basin.”