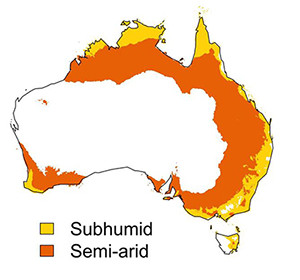 Our research, published today in Nature Climate Change, shows that river flows have decreased by 24-28% in a large part of Australia due to increasing CO₂ levels, which have risen by 14% since the early 1980s.

This could exacerbate water scarcity in several populated and agriculturally important regions.

It was previously unclear whether the increasing CO₂ in the atmosphere has led to detectable changes in streamflow in Australian rivers. This is partly because increasing CO₂ can have two opposing effects on water resources.

CO₂ is the key ingredient for photosynthesis, and higher concentrations allow plants to grow more vigorously. This fertilisation effect could be expected to lead to denser vegetation that needs more water to grow, in turn reducing the amount of rainwater that can run off into rivers.

Acting directly against this is the fact that increased CO₂ concentrations allow plants to use water more sparingly. Small pores called stomata on the surface of leaves allow plants to regulate their uptake of CO₂ for photosynthesis and water loss to the atmosphere. At higher CO₂ concentrations, plants can partially close these pores, maintaining the same influx of CO₂ while also reducing water loss through transpiration. This could be expected to leave more rainwater available to become river runoff.

The net effect of these two counteracting processes has so far been highly uncertain. In our study, we used a new method that combines satellite measurements of vegetation cover with river flow data collected for over 30 years. Using statistical methods we factored out other influences that affect river flows, such as variations in rainfall.

Our results suggest that the net effect of increased CO₂ has been declining runoff across the subhumid and semi-arid parts of Australia, and that this can be attributed to the increased vegetation.

The good news is that increasing CO₂ might also make plants better able to survive in these drying landscapes. By using water more efficiently, plants can grow more vigorously in arid regions and should better withstand droughts, such as those commonly associated with El Niño events. In areas with an average annual rainfall below about 700 mm, we found that the amount of vegetation cover that can be sustained has increased by about 35% since the early 1980s. This is good news for dryland cropping and grazing which are likely to enjoy increased yields as a consequence.

Despite these positive effects, in less dry parts of Australia, the reduction of river flow adds yet more pressure to water resources. As natural vegetation is greening and consuming more water, local rivers and dams are receiving less. At the same time, rainfall patterns are changing. With the exception of northern Australia, many of the affected areas are already experiencing declining rainfall and this trend is projected to continue into the future with increasing global temperature.

Elsewhere around the world, vegetation increases have also been observed in other dry regions such as southern and western Africa and the Mediterranean. It is certainly possible that these regions are also facing declining streamflow as a result.

The increase in vegetation helps to draw CO₂ from the atmosphere, but the effect is not enough to significantly slow the rise in atmospheric CO₂ and the resulting long-term climate change. Despite the observed greening, most of Australia’s vegetation continues to be very sensitive to rainfall changes. If rainfall continues to decline as projected, the greening trend may end or even be reversed, releasing the stored carbon back into the atmosphere.