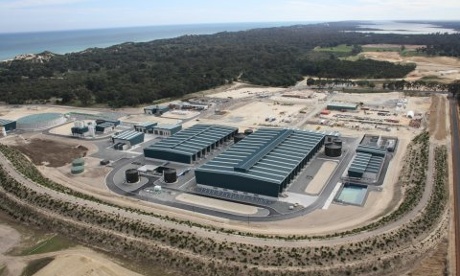 by Oliver Millman, The Guardian

A predicted 40% decline in rainfall in southern Australia could mean that the West Australian capital, Perth, will have to rely on alternative sources of water in future, a new climate change research paper warns.

The study, led by an academic at the US’s National Oceanic and Atmospheric Administration, examined the causes of rainfall decline in southern Australia over the past few decades and concluded that human activity was a significant contributor.

The findings, published in the journal Nature, say that increases in greenhouse gases and ozone in the Earth’s atmosphere are responsible for suppressing rainfall. Other measured factors, such as aerosol particles, are not as significant.

“Simulations of future climate with this model suggest amplified winter drying over most parts of southern Australia in the coming decades in response to a high-end scenario of changes in radiative forcing,” it states.

“The drying is most pronounced over south-west Australia, with total reductions in austral autumn and winter precipitation of approximately 40% by the late 21st century.”

The Perth area is particularly vulnerable to these predicted rainfall changes because most of its rainfall occurs between May and September.

This winter rainfall largely arises from wind and storm patterns that bring moist air from areas such as the Indian Ocean. Previous studies suggest that trapped heat in the atmosphere, driven by the release of carbon emissions, is changing this weather pattern, pushing the Roaring Forties’ system further south.

This means that Perth, and to a lesser extent Adelaide and Melbourne, faces far lower rainfall because of climate change.

“Things are going to get a lot worse for Perth,” he said. “They are already seeing the impact of reduced rainfall and the future will see an additional doubling of the decline they’ve already seen.

“The rainfall flow into Perth reservoirs has already reduced by up to 75% over the past 50 years. This study gives us much greater confidence that this was down to human-induced climate change.

“The only way for Perth to continue as a city is to find alternative water sources because a further large decline in rainfall will mean they won’t have enough water to supply their current population.”

Karoly said the lack of rain, which will also severely affect the winemaking region of Margaret River, and other agriculture in Western Australia, will confront future governments with some difficult decisions.

“The WA government has already developed two water desalination plants in response to the drop in rainfall we’ve already seen,” he said.

“If Perth shifts to getting its water primarily from desalination, they have a dilemma. Desal plants need a lot of energy; they are sometimes described as liquid electricity. There isn’t enough renewable energy currently in WA to power lots of desal plants, so by powering them by fossil fuel electricity they make the problem worse.”

Nerilie Abram, a climate research fellow at the Australian National University’s College of Physical and Mathematical Sciences, said the study paints a “very worrying picture” for parts of Australia.

“This new study adds another compelling piece of evidence to the idea that we can expect southern parts of Australia to keep getting drier over the coming century, unless strong action can be taken to reduce greenhouse gas emissions,” she said.

“The impacts to Australia of the westerly winds pulling in tighter around Antarctica won’t just be seen in changes to our rainfall patterns. These winds are also warming the oceans around the edges of Antarctica, causing the margins of the large ice sheets to melt, and this is expected to have big implications for how quickly sea level will rise over the coming centuries.”