“State governments destroying plan to save Australia’s most important rivers” 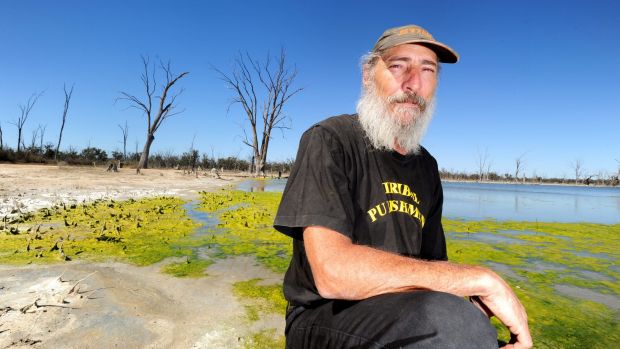 A $13 billion plan to rescue Australia’s most important rivers is being “actively destroyed” by the NSW and Victorian governments, which refuse to ensure water flows high enough to keep floodplains and forests alive, leading scientists say.

The Wentworth Group of Concerned Scientists said the failures of the two upstream governments, as well as recalcitrant landholders and a price-gouging private company, threatened to render the Murray-Darling Basin plan “useless”, compromising a river system on which millions of Australians depend.

The plan stipulates the amount of water that can be drawn from the Murray-Darling system, aiming to take at least 2750 gigalitres a year from irrigated agriculture and return it to rivers, wetlands and flood plains.

The group of scientists, led by Associate Professor Jamie Pittock, is conducting the first independent review of the plan, due for completion this year.

Darren Perry at Psyche Bend Lagoon, near Mildura. In background is algae forming as a result of high water temperatures and low oxygen. Photo: Louise Donges

Their research has already revealed physical and other barriers that threaten “the survival of floodplain forests and the future of the entire Murray-Darling river system”, Dr Pittock said.

“The Victorian and NSW governments are actively destroying the basin plan,” he said.

“There’s no point having a large volume of water for the environment if the state governments will not let it out of the river channels and onto the floodplains … to keep forests and wetlands alive.”

He pointed to a $200 million constraints management strategy, of which just $5 million has so far been spent.

The strategy aims to mitigate the effect on landholders of minor managed flooding, allowing water to spill over the bank and replenish flood plains. The federal funds would pay for measures such as relocating bridges and strengthening levee banks.

The onus is on state governments to propose projects; just five projects have so far been funded. They must be completed by 2024.

Dr Pittock said the NSW and Victorian governments appeared unwilling to embark on complex negotiations with landholders and their efforts so far “won’t let enough water flow down … to spill and water the flood plain forests”.

NSW Minister for Regional Water Niall Blair said his government was committed to the basin plan but was also “mindful of the need to bring river communities with us”.

“We know the importance of local input and knowledge in reaching a successful outcome, and that remains our focus,” he said.

Victorian Water Minister Lisa Neville said there must be a “whole of system approach to constraints across the basin” and any benefits achieved “must outweigh any potential costs to Victorian landholders and communities”.

The works involve channels and other structures to direct Murray River flows through the Koondrook-Perricoota Forest, the second-largest red gum forest in the world, to mimic natural floods.

“This taxpayer-funded investment has been rendered nearly useless because NSW government [agencies] did not negotiate compensation with one farmer whose land would be periodically inundated,” Dr Pittock said.

In a joint response the Murray-Darling Basin Authority, Forestry Corporation NSW and NSW Crown Land and Water said the works had been expected to operate in six or seven years of every decade.

However the test event, and natural floods in recent years, had “provided improvements to the forest health,” the agencies said.

Landholders “have been proactive in developing and proposing sensible, locally-driven solutions” to issues associated with the works, they said.

It has also emerged that Murray Irrigation Limited, Australia’s largest private irrigator, has hiked up the charge to taxpayers of using a key piece of its infrastructure to deliver water downstream.

The move has triggered a two-year stalemate with the authority and Water NSW, who refuse to pay what the authority described as a “significantly” increased sum.

The agencies had been using spare capacity in the firm’s Mulwala irrigation canal, in the NSW Riverina region, to bypass a narrow section of the river known as the Barmah Choke, then deliver water back into the system. At 156 kilometres it is the longest man-made irrigation canal in the southern hemisphere.

Authority documents say a lack of access to the infrastructure “may prevent better watering of flood plains below Swan Hill” in north-west Victoria.

Dr Pittock said some companies and irrigators were being “allowed to deny water to downstream communities and the river system”.

The Murray Irrigation Limited infrastructure was used to supply water to wetlands without flooding farms and other infrastructure, and the company was “holding the environment to ransom,” he said.

An authority spokeswoman refused to say how much Murray Irrigation Limited was seeking and said negotiations are continuing. The situation “has placed more pressure on the delivery system” but the authority had met all agreed environmental water orders, she said.

A spokesman for Murray Irrigation Limited said it was keen to “maximise the use of our water delivery system to achieve strategic environmental goals”, adding the canal was recently used to help native fish populations survive a toxic water event.

“There has not been a failure to deliver on environmental water requests by this company,” he said.

‘It was heartbreaking to me’

The sight still haunts Darren Perry – Murray crayfish as long as a forearm, crawling from the water “just trying to breathe”.

It was early 2012 and heavy rain had dislodged fetid water in upstream swamps and lakes, sending it gushing down the Murray. Now it had arrived at Swan Hill.

“It’s dead water, it deoxygenates the entire river. The water is black, dirty, it smells – it’s just terrible,” Mr Perry said of the phenomenon, known as a blackwater event.

“[Murray crays] were climbing up trees … everyone says ‘oh look crays, crays everywhere!’ People were picking them out of the trees.

“It was heartbreaking to me, because I knew they were going to die, and I knew there would be none left in the river.”

Mr Perry, former chairman of the Murray Lower Darling Rivers Indigenous Nations, said the absence of regular minor floods – enough to spill over the river banks – had allowed the toxic water to build up.

“Farmers get their roads cut off or they might get their bottom paddock flooded and say ‘no we don’t want that’. So you can’t raise the river high enough to achieve the proper outcomes,” he said.

“[But] unless … that water can get out to the flood plains properly, the system is slowly dying”.

Since the blackwater event, Mr Perry says the Murray Cray – an iconic species to his people – is locally extinct.

“We protect the environment so it provides for us.”