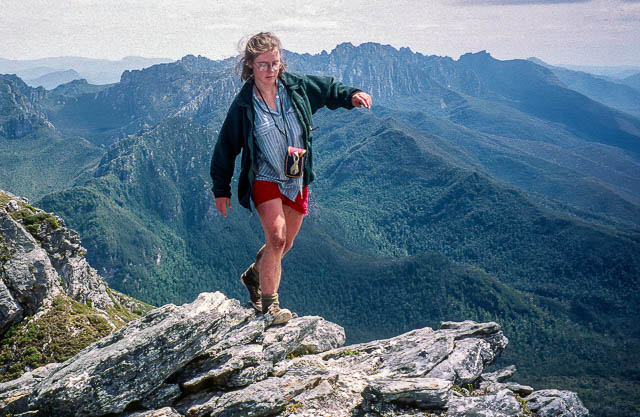 (extract from a message circulated by Dr Helen Cleugh, CSIRO)

It is with a heavy heart that I share with you the sad news that our dear colleague and friend, Dr Vanessa Haverd, passed away on Tuesday Jan 19. Vanessa was a very private person, and so I realise that not all of you might have known that she had been unwell for some time and that her health deteriorated rapidly over the last few weeks.

Vanessa was a truly talented, creative and productive scientist with exceptional model development and analytical skills; she is considered to be among the best biosphere modellers in the world. Her dedication to everything that she took on was impressive.

Those of us who worked with Vanessa remember her fondly for the passion, drive and energy for all that she undertook – whether that be her research, or her music, or running marathons (of which she won several). Indeed, we got so used to her producing miracles in all her endeavours that we all hoped that she might pull off another one; but not this time. Vanessa is probably the strongest person I know, with an ability to persevere and succeed in the face of adversity that was simply inspiring.

She joined CSIRO in February 2007 as a Research Scientist [Model Data Fusion for Water-Carbon-Climate]. In those early days she worked closely with Mike Raupach, Peter Briggs and Cathy Trudinger on the Australia Water Availability Project, and with Ray Leuning and me investigating land -air interactions – especially observations and analyses from the Tumbarumba Observatory and the Australian “OzFlux” flux monitoring network. Vanessa’s high quality fundamental research, along with her ability to tackle technically difficult model development and apply these to research areas with impact, echo the very qualities we admired in Ray and Mike who were her early mentors.

One of Vanessa’s most significant research contributions was the 2013 publication of the first terrestrial carbon budget for Australia, which combined observations and model simulations to parameterise and constrain the modelled estimates. These papers, led by Vanessa, demonstrate the power of combining model and observed data via a formalised model – data fusion framework. This had been our research goal for more than a decade, so this publication was certainly a highlight for the Canberra team.

Over the last decade, she led high quality and innovative research into the dynamic interaction between regional and global carbon budgets and the climate system – in collaboration with CSC, Australian and international scientists and groups. Her leadership and research made influential and significant contributions to the annual Global Carbon Budget published by the Global Carbon Project, as well as the Australian Climate Change Science Program and NESP Earth Systems and Climate Change Hub.

She also led substantial scientific contributions to Australia’s community land surface model, CABLE; benchmarked as one of the best land surface models in the world. This has enabled us to better understand how terrestrial ecosystems respond to climate variability and change, and land management, here in Australia and globally; as well as advancing Australia’s global Earth System modelling capability in ACCESS.

Such was her zealous enthusiasm for science that Vanessa continued her research, collaboration and publications even as her illness started taking its toll; attending regular meetings with Pep, Peter, Juergen and Ben Smith – a Visiting Scientist from Western Sydney University – to progress their research projects and papers. At the Xmas lunch for our Canberra team in December she was telling us about her latest paper that was about to be submitted.

CSIRO and the Climate Science Centre, along with the Australian and global science community, is without doubt a poorer place without Vanessa – she will be missed dearly. She leaves behind a much better understanding of terrestrial ecosystems, especially the way they cycle carbon, water, nutrients and energy and what this means for hydrology, regional and global climates, and climate mitigation; a version of CABLE that is needed to answer some of the most pressing research questions; a network of collaborators around the world; and an amazing husband and beautiful daughter. Our deepest condolences and thoughts are with all of you, and especially her family.

We have lost too many CSC colleagues in Canberra in recent years, and to now lose someone of Vanessa’s calibre, at the zenith of her scientific career, is very hard to bear. I do therefore ask our broader CSC family to support each other and your Canberra colleagues as we weather yet another sad time.

In closing I also want to acknowledge and sincerely thank Pep Canadell, Vanessa’s closest CSIRO colleague and mentor, who has been such an enduring support to Vanessa and her family as well as his colleagues in Canberra and beyond. Thank you Pep.”