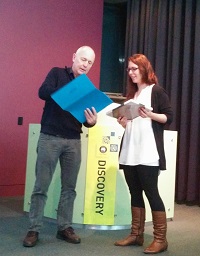 The 1st annual OzEWEX workshop was held 28-29 October 2014 at CSIRO Discovery Centre in Canberra. The workshop examined the water and climate information needs for the future and compared them to the current state and developments in information services, observation sources, scientific knowledge and model technology.

The workshop was organised by the Australian Water and Energy Exchanges Initiative (OzEWEX) under the auspices of the Global Water and Energy Exchanges Project (GEWEX) and the Modelling and Simulation Society of Australia and New Zealand (MSSANZ). It was made possible by generous financial support from Commonwealth Scientific and Industrial Research Organisation (CSIRO), the Fenner School for Society & Environment of The Australian National University, MSSANZ, the ARC Centre of Excellence for Climate System Science (ARCCSS) and the Bureau of Meteorology (BoM).

Around 100 participants attended the workshop, which was free to attend thanks to the workshop sponsors. Of the participants, about half were from universities and half from government departments and agencies, including 20 from the CSIRO and Bureau of Meteorology each.

There were oral 40 presentations in total, including 2 plenary morning sessions, with 3 or 4 invited speakers each and 6 discussion sessions, round an overarching question; each involving 3-7 introductory presentations followed by facilitated debate. 20 posters were presented during the poster session, including 9 presented by PhD students.

The $500 MSSANZ student poster prize was awarded to Anna Ukkola of Macquarie University, for her poster titled “CO2-induced greening reduces streamflow in water-stressed climates in Australia”

You can access abstracts, presentations and posters via the conference proceedings web site.

Excellent article by Prof. Neville Nicholls. The bushfires are horrendous, but expect cyclones, floods and heatwaves too via @ConversationEDU

The peak time for heatwaves in southern Australia has not yet arrived. Many parts of Australia can expect heavy rains and flooding. And northern Austr...