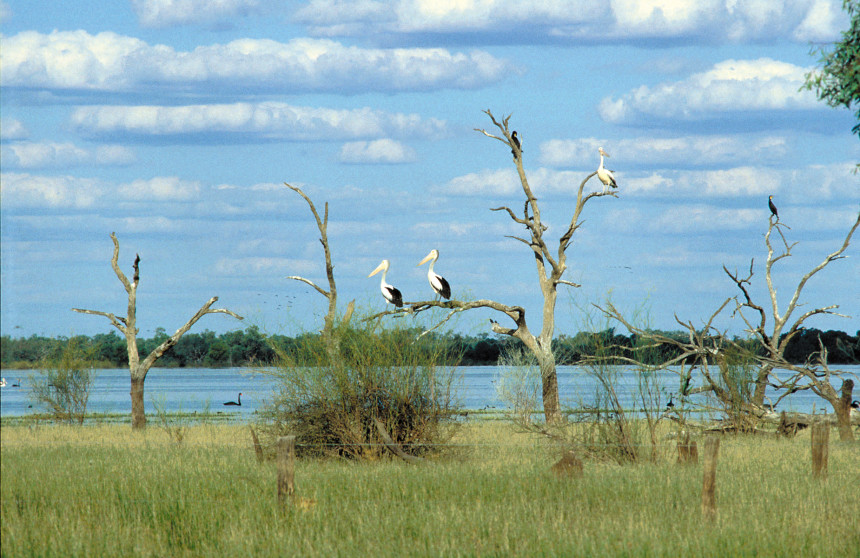 Water bird numbers at the world famous Menindee Lakes, near the site of this year’s massive fish kill, are in long-term decline, amid an ongoing failure to manage water levels to match weather fluctuations, leading ecologist Richard Kingsford says.

Bird numbers at the lakes in far-western NSW peaked at about 140,000 in 1985, according to surveys taken annually since 1983. For each good wet year since that record, the bird count has been falling.

Water populations “are a bit like a tennis ball…but the bounce is just getting lower and lower” during good years, said Professor Kingsford, who is director of the Centre for Ecosystem Science at the University of NSW.

The lakes “are one of the hotspots for water bird in eastern Australia, and they’ve been declining for some time”.

The decline shows the lakes are being managed in ways out of sync with natural fluctuations, he said.

Levels are being kept artificially high when water is available in the Darling River and then drained too quickly for the ecosystem to take advantage of the wet period.

“It’s when they try to get the water out – that’s the real problem,” Professor Kingsford said. “It doesn’t allow the natural concentration” of invertebrates and food sources for birds to develop.

Plans to reduce evaporation losses from the shallow lakes by deliberately draining the water faster – as a proposed Sustainable Diversion Limit project would do – only exacerbates the problem for birds needing food to accumulate, he said.

The health of the Murray-Darling river system is in the spotlight after a fish kill in the Darling River behind the Menindee Weir 32 earlier this month left as many as a million fish dead.

While the fish carcasses provided easy picking for fish-eating birds such as pelicans and cormorants, any boost is likely only to be short-term, Professor Kingsford said.

The water bird figures are collected each October and in the same locations. The data show a drop in the diversity of species – which include herons and ibises – but also the near absence of breeding at the lakes since 2012, he said.

The state of the region’s ecology and mismanagement of water resources will be studied by the Australian Academy of Science after the body took up a request by Labor leader Bill Shorten, as reported by the Herald.

Labor has asked for a report by February 10 and says it will be made public.

Some of the birds may be making their way to some of the dams set up by irrigators, such as cotton growers further up the Darling.

A manager at Darling Farms – a currently fallow cotton farm near Bourke because of the absence of water – told the Herald during a visit last week that “the birdlife was absolutely phenomenal” during times when dams were full.

Black swans “in the middle of the desert” were one feature, while the numbers of brolga were also impressive.

“We saw thousands of them – it was absolutely ridiculous,” the manager said as he showed off nearby bird nests.

Such sanctuaries, though, are unlikely to be long-lasting, particularly as dead trees start to rot, Professor Kingsford said: “It’s a very temporary nesting habitat.”